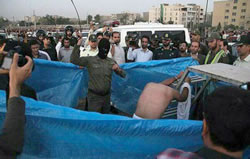 From the International Alliance in Support Of Workers in Iran (IASWI), June 1st, 2016

The anti-union anti worker regime of Islamic Republic of Iran in May 2016 has carried out flogging sentences against 17 workers at Agh Dareh Gold Mine in West Azerbaijan Province. Each worker received between 30 and 100 lashes.

The regime carried out these brutal flogging sentences against mine workers after they staged actions to protest layoffs of about 350 workers.

This is not the first time the anti-worker IRI has sentenced workers to flogging.

However, within the currant socio-economic and political contexts and the implementation of the most aggressive austerity and anti-worker agendas in Iran after the nuclear deal with the US and other world capitalist powers, the regime is preparing for even harder stance against the working class.

We are calling on the international working class to strongly condemn the barbaric flogging sentences against workers in Iran and to pressure the Iranian regime to stop this brutal and torturous practice altogether.