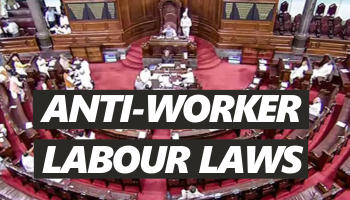 In a matter of three or four hours of parliamentary time, labour rights won by workers over a century and a half were wiped away and replaced by the Codes on Industrial Relations, on Social Security and on Occupational Health, Safety and Working Conditions. The BJP‚Äôs ‚Äòmaximum governance‚Äô comes with a brutality that turns over labour rights entirely in favour of capital. A day before this the BJP ran through parliament new laws that change the course of pricing and markets for farm produce placing income and livelihood of the entire peasantry at risk.

For the past six years trade unions have stressed that the government has refused all discussion on labour law ‚Äòreform‚Äô. While introducing the bills the Labour Minister claimed that government had accepted 80 per cent of the electronic suggestions and 85 per cent of the recommendations made by the parliamentary committee. No one can tell what recommendations government accepted, but it clearly rejected the recommendations of the standing committee on the definition of workers and employees, on closure and retrenchment, on lowering standards for health and safety, on the lack of protection for fixed term contract employees, on inadequate protection for workers against disciplinary rules along with the sheer scale of delegated legislation and violation of principles of separation of powers between the centre and the states.

The BJP promised to ‚Äòconsolidate‚Äô 44 allegedly out dated, unwieldy and contradictory laws into four codes through ‚Äò‚Ä¶amalgamating, simplifying and rationalising the relevant provisions‚Äô of law and codify them by including case law derived from judicial decisions of courts. Many critical labour rights have been won through long legal battles by unions over time, a majority of which have been excluded from this process of ‚Äòcodification‚Äô. On the basic question of what is an ‚Äòindustry‚Äô, the Supreme Court settled through its 1979 ruling that it must be defined by the nature of work and not just by the existence of the profit motive. Further, both the Andhra Pradesh and Madras High Courts ruled in 1982 that tribunal awards cannot be altered by government. Both these critical advancements find no mention in the codes.

Multiple definitions of worker and employee in the Codes have created more ambiguity than earlier and will now allow employers to use this ambiguity to deny workers their already limited rights. The Codes expressedly exclude the huge numbers of agricultural workers, ‚Äòhonorarium‚Äô and domestic workers, the overwhelming majority of who are women, from the definition of a worker. At the other end, a wide definition of ‚Äòmanager‚Äô will allow employers to classify a large number of workers in this category. The definition of ‚Äòemployer‚Äô now includes contractors and sub-contractors effectively absolving the principal employer of all responsibility. The government, of course believes that the contract labour system will be replaced by fixed term contracts (FTC), who are not provided any safeguards on period of contract, its renewal and any possibility for regularisation. Hence the established judicial premise that a perennial task must command a permanent job is now a renewed challenge.

The threshold for most critical health and safety provisions will now only be applicable in establishments with 300+ employees. The same threshold now applies for introduction of standing orders, for lay off, retrenchment and closure, shrinking the number of establishments where there will be jobs protected by law.

Most significantly, the entire body of the four codes can effectively be set aside at the will of the executive in ‚Äòpublic interest‚Äô. So we could have a situation that a coal mine or petroleum refinery here or a sea port or car manufacturing factory there can be made completely free from even the few rights that are left in ‚Äòpublic interest‚Äô.

The most significant expectation of people at large and the promise of the BJP government has been universal social security. The code has settled this through a discriminatory two tier system that divides ‚Äòemployees‚Äô and ‚Äòunorganised workers‚Äô through ‚Äòrights conferred on them and schemes framed, under this Code‚Äô respectively. In effect, a very small number of regular employees whose workplaces will qualify as an establishment will have the right to social security (PF, ESI, gratuity and maternity benefit) as guaranteed in the past, and the remaining large section of the working population will have to squabble over the benefits given out under the various budget constrained ‚Äòschemes‚Äô of a ‚Äògenerous‚Äô government. These schemes shall be made up by the executive and will neither be disbursed from legislatively protected funds nor be justiciable in a court of law.

Trade Unions as Centres of Resistance

The future course of the country‚Äôs working class will be determined critically by our response to the new codes, most of all on the attack on trade union rights ‚Äì on registration, on membership, on union recognition, and on the right to strike. As elsewhere in the world, trade union rights in our country too were won through sustained militant hard fought battles with unparalleled sacrifice. Trade union rights have always been won by challenging the laws of private property and profit. These are not rights we shall give up.

Of course, we know that the BJP has carefully chosen this time to launch what it thinks is its final attack on the working class ‚Äì a time when vast numbers of working people have been without work and wage for almost six months as a result of the draconian lockdown. This is not just an attack on working people, it is an attack that hits at the very core of democratic rights on our right to free association, on our rights to defend our rights, on our rights to dissent, speak up and strike when our rights are under attack. Whether it is the right to universal social security, or a fair and just minimum wage, or a safe workplace or a secure job: none of it can be won and secured without trade union rights. Hence our struggle must go forward in defending, retaining and sustaining our trade union rights. And it is with this resolve that we must and we will go forward in a struggle that is united, democratic and militant.