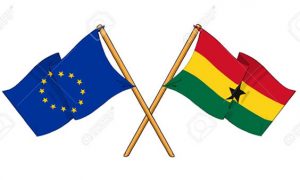 The EUŌĆÖs trade deal with Ghana may not have made headlines, but it threatens to undermine the Sustainable Development Goals and West African economic integration, writes Jude Kirton-Darling.

While all trade campaigners, officials and policy-makers have turned their attention to Namur and the CETA talks, another item on the EUŌĆÖs agenda is progressing virtually unnoticed: a trade deal with Ghana known as the interim Economic Partnership Agreement (iEPA). If accepted, this ŌĆ£incomplete and outdatedŌĆØ deal (to quote rapporteur Christofer FjellnerŌĆÖs draft report) could mark the end of a ten-year negotiation for a region-to-region EU-ECOWAS Economic Partnership Agreement with West Africa, threaten a nascent regional currency union and undermine prospects for a progressive EU development-focused trade agenda. In its meeting on 9-10 November, the European ParliamentŌĆÖs international trade committee will take a decision on the ratification of this deal.

Ghana signed the interim EPA in November 2008 but only ratified it in September 2016, following the coercive adoption by the Commission of a delegated act before the summer to remove the country from the list of duty-free/quota-free beneficiaries under the Markets Access Regulation. Alternatives to this retrograde step exist and have generated much debate in Ghana and the region, such as extending coverage of the Market Access Regulation or including the more favourable terms of the ECOWAS EPA in the outdated iEPA. But these have been rebuffed, despite the reality that both alternatives would offer more favourable terms and promote regional integration, of which Ghana has been an avid advocate in the region.

Resorting to such tactics can only be damaging to EuropeŌĆÖs standing in the world. The EU was founded as an alternative to the use of brute force in international relations. Its history is intertwined with that of decolonisation. Progressives are rightly outraged, and Socialists and Democrats (S&D) MEPs ŌĆ£firmly reject[ed] the use of coercion or threat to remove market access in [the EPA] ratification processŌĆØ in June 2016 when setting out our vision for EU-African relations. Supporting the iEPA validates the use of this method, which alone should be enough to reject the deal. Sometimes, it is important to say, ŌĆ£not in our nameŌĆØ.

But as parliamentarians, we must evaluate the agreement on its merits and in this respect there are other good reasons to reject what is widely recognised to be a poor deal. For S&D group MEPs, regional integration and sustainable development have always been the guiding principles for Economic Partnership Agreements. The Ghana iEPA fails both tests.

As stated, the interim EPA could hinder Western AfricaŌĆÖs regional integration process, which the EU rhetorically supports, by introducing different tariff-reduction rules, origin rules and standstill clauses for Ghana compared to a regional EPA or the EUŌĆÖs concluded iEPA with Ivory Coast, effectively creating distortions in a nascent currency union. Ghana has been an avid advocate of regional integration and progressive force in the region but the ECOWAS EPA still needs three signatures from Nigeria, the Gambia and Mauritania before ratification can take place. Forcing the hand of the Ghanaian government, naturally keen to maintain the market access of their export industries, deals a blow to the prospect of a regional agreement and the implications for intra-regional trade. As many policy-makers have found in the past, there is often nothing more permanent than a temporary solution, particularly when leverage for a better permanent solution is discarded.

Secondly, the iEPA says nothing about human rights or sustainable development and makes no mention of civil societyŌĆÖs role or involvement. Although weak, the regional EPA is at least linked to the Cotonou agreement. This is no judgement on the current government of Ghana or its work to improve sustainable development at home and abroad. However, long experience shows that sustainable development suffers without specific provisions in trade deals. Moreover, it suggests that the EUŌĆÖs liberalisation agenda for Ghana could undermine the Sustainable Development Goals, of which both Ghana and the EU have been keen advocates.

Responsible lawmakers should be concerned with the alternative. The Commission argues that there is no alternative to this deal. That shows a clear lack of imagination and goodwill. Ghana has ratified the iEPA and this means that legally it can keep its market access under EU law (MAR Article 3) regardless of the European ParliamentŌĆÖs position. This could be challenged at the WTO, but the EU could always ask for ŌĆō and would obtain ŌĆō a waiver. Such a waiver, which allows countries to derogate from WTO rules in certain circumstances with the agreement of all other WTO members, was in place until 2007. The US still has one for its own trade preference regime with sub-Saharan African countries, and just last November secured the renewal of the waiver until 2025. Such a waiver would allow the space and leverage to achieve the regional EPA and if there remains little appetite in Nigeria, would allow time to negotiate a proper relationship with Ghana and potentially Ivory Coast based on a fairer, development-focused economic partnership.

Other trade negotiations are dominating the political debate, but our economic relations with Africa deserve proper time, attention and scrutiny as we manage shifting geopolitical plates and as new economic powers rise.