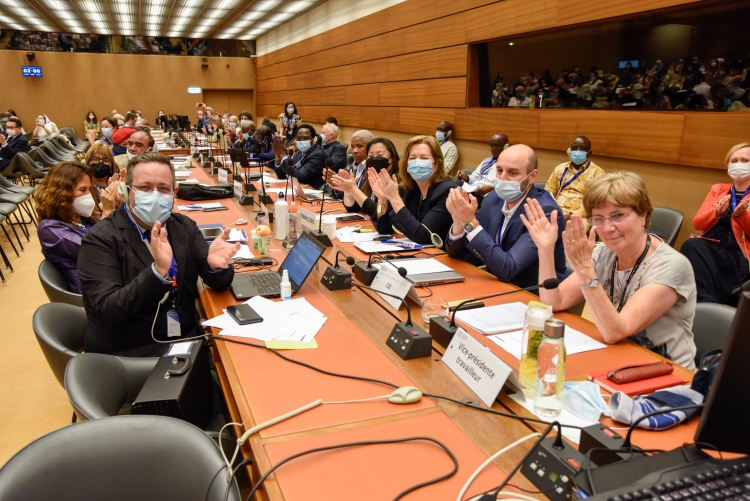 Working people around the world are set to benefit directly from the decision today at the International Labour Conference (ILC) to recognise occupational health and safety as the fifth fundamental principle and right at work.

The change by the ILC ŌĆō the UN parliament for workplace issues ŌĆō is the first extension of workersŌĆÖ fundamental human rights in a quarter of a century.

Over 3 million workers a year die because of their work and tens of millions more suffer injuries and ill health. This victory, from a sustained three-year campaign by trade unions, professionals and practitioners and victimsŌĆÖ families, will begin to turn that deadly tide.

It adds the right to a healthy and safe working environment to the four rights adopted in 1998 by the International Labour Organization (ILO):

The ILC, which brings together unions, employersŌĆÖ representatives and governments from the member states, also adopted ILO Convention 155 on occupational health and safety and Convention 187 on promoting health and safety as ŌĆśfundamental conventionsŌĆÖ that all ILO member countries are obliged to uphold.

ITUC General Secretary Sharan Burrow said: ŌĆ£The COVID-19 pandemic showed beyond doubt that action was needed to protect workers who are all too often forced to choose between their health and their livelihood. No one should die just to make a living.

ŌĆ£Workers and unions around the world have marked International WorkersŌĆÖ Memorial Day every 28 April mourning the dead and fighting for the living. Now we should celebrate this win and get down to making these rights effective.ŌĆØ

Unions will now campaign to increase the number of countries ratifying and implementing all ILO health and safety conventions, giving workers the right to consultation over risk assessments, eradication of toxic chemicals and toxic work organisation including long hours, as well as free protective equipment and training and the right to refuse dangerous work.

Unions will also campaign to extend access to occupational health services beyond the 20% of workers worldwide who currently have it, as well as universal sick pay from day one, more powers for union workplace safety reps and more joint safety committees.