How Collective Bargaining Can Tackle The Race To The Bottom 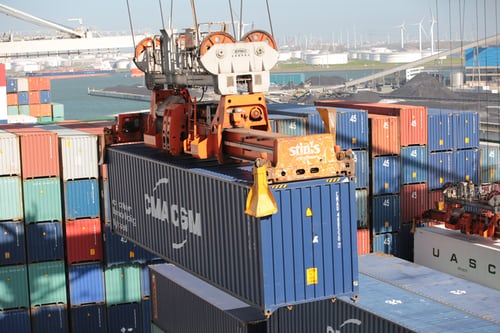 Neoliberal globalisation has led to a ‘race to the bottom’ as free trade policies force workers and whole industries to compete across borders â€“ but there is a solution: trade union representation.

In 1966, the first transatlantic container ship arrived into the Port of Grangemouth. The shipâ€™s 226 containers were loaded with Scotch whisky for return sailing to the United States. In 2020, HMM Algeciras, the worldâ€™s largest containership, arrived into the London Gateway from Qingdao, China with a capacity of 9,800 containers. The development of international trade in the half century between those two events has repeatedly shaped, disrupted, and re-shaped the jobs and lives of workers in every part of the UK far beyond the docks.

The history of trade over the twentieth and twenty-first centuries is not one of a smooth transition to globalisation, but one of sharpening economic and political tensions, disruption, and repeated crises. The costs and benefits of trade are a constantly evolving issue that is representative of the structural tensions between labour and capital. Reducing the costs and increasing the benefits of trade for workers is what ultimately makes trade a collective bargaining issue. Trade would simply not exist without workersâ€”even taking into account huge technological advances and the drive towards automationâ€”and cannot simply be left to the trade experts and policy advisors.

Unite has just published a report which seeks to close the gap between trade as an abstract issue and its real-world industrial impact on workers. To do this, workplaces must no longer be seen in isolation â€“ but as connected within supply chains and networks of fragmented production. As the report shows, this is a conclusion which has also been drawn by corporate consultants who are now tasked with finding the vulnerabilities of this same system in the light of both Covid-19 and Brexit. Importantly, the report also argues that this disruption can be countered by a collective bargaining approach that draws on the structural power of workers and develops strategic links between shop stewards in supply chains to build new industrial leverage.

Trade is an Industrial Issue

The report contains original research exploring to what extent the industrial impact of trade can be seen as an issue which can be countered by Unite workplace reps and shop stewards at the bargaining table and beyond. Of the 30 reps (across a number of sectors and predominantly from workplaces that are vulnerable to trade disruption) interviewed in detail for the project, 70% saw trade as a threat to their members.

Reps identified the â€˜race to the bottomâ€™ and rivalries between international sites for investment as two significant ways this industrial impact manifested itself. The overwhelming view, shared by 97% of interviewees, is that there is either an immediate or potential value for a collective bargaining strategy for trade to counter these issues. Understandably, Brexit dominated responses to the issue of potential trade threats (interviews were conducted before the conclusion of the EUâ€“UK Trade and Cooperation Agreement).

Due to the nature of free trade, increased costs, insecurity and disruption all lead to increased competition between employers who are seeking to secure their investment, gain a competitive advantage and increase market share. Employer strategies to seek cheaper labour and production costs precede neoliberalism but have been intensified by the globalisation of the world economy, aiding the ability of multinational corporations to move capital, goods, services and labour across borders.

Brexit and increasing tensions between the major trading powers have created conditions for employers to exploit uncertainty and rising costs to potentially move sites to countries with cheaper labour or rely more heavily on existing sources of cheaper labour.
The governmentâ€™s proposals for new freeports extends the dynamic of competition between workplaces to industrial sectors and whole towns, but it also shows the practical importance of union representatives coordinating their response across industrial sectors.

The report presents changes to post-Brexit trade primarily as a disruptive event. It therefore makes sense to consider how employers are reacting to Covid-19, an indisputably disruptive global event, to see if any precedents have been set. The interviews suggest that in workplaces with strong organisation, the employer worked with Unite reps on strategies to make the workplace safer, although cases of employer opportunism and hostility also began to emerge as the research progressed.

80 percent of the reps interviewed believed that their employer had initially acted responsibly during the pandemic, partially attributable to the fact that half of the reps interviewed reported a union density of 90 percent or higher. This is not inconsistent with the findings of a separate survey of some 1300 Unite reps conducted in May 2020, which found nearly two-thirds reporting their employer behaving responsibly to Covid-19 (with a likely wider range of density levels between respondents).

90 percent of reps interviewed for this latest report claimed that Covid-related changes had come about through negotiation with the union. This is a testament to the importance of strong collective bargaining agreements and the role of reps in negotiating changes in membersâ€™ interests. 13 percent of reps also believed that their relationship with their employer had actually improved during the pandemic, largely due to the positive role of Unite health and safety reps and the need for cooperation between the union and the employer in a time of crisis.

Despite this cooperation, some reps were left under no illusions that some of the positive changes made by their employers have been entirely out of self-interest. Though relations between reps and their employer have generally been good during the pandemic, 20 percent of those interviewed reported that they felt that their employer had done the bare minimum to keep their members safe. Notably, three of the reps who reported this also claimed that the changes the employer made were imposed and not negotiated with the union. These examples highlight the importance of strong union density in the workplace and a willingness and ability to take action. This emphasises the need for a collective bargaining renaissance in this country and a political commitment to it.

Recent weeks have seen warnings that the controversial practice ofÂ  â€˜fire and re-hireâ€™ has become widespread during the Covid-19 pandemic. Whatâ€™s more, the government has a review of workersâ€™ rights in its sights, notwithstanding the recent U-turn. It must make good on its promise to â€˜protect and enhance workersâ€™ rightsâ€™ and do so in the much-delayed employment bill. It is therefore vital that unions increase pressure on the government, which is waiting for an opportunity to use the fallout from Brexit and Covid to attack workersâ€™ rights.

Regardless of the governmentâ€™s plans, union reps will always fight to maintain and improve density levels and collective bargaining. One way to do this is to consider density beyond the immediate workplace, and across the supply chain. This would mean identifying and proactively using positions of organisational strength for the benefit of all workers within the chain.

Economic disruption, whether through trade or Covid-19, can be seen as both a threat and an opportunity. This is certainly the view of the reps interviewed for the project. The threat of neoliberal free trade policies to workers and trade unions is well-established and has contributed to a major decline in union membership and power over the last 50 years. More recent phenomena like the rise of freeports, automation, and e-commerce companies like Amazon also place new strains on workers and create challenges for trade unions working to defend and improve their membersâ€™ rights, pay, and conditions.

However, these new and pre-existing challenges also offer opportunities. Despite capitalâ€™s efforts to undermine the power of workers through the atomisation of production and distribution, global capitalism still relies on supply chains that are prone to significant vulnerabilities and â€˜choke pointsâ€™ (points in the chain that, if disrupted, can slow down or stop supply altogether). This potentially gives workers in these vital choke pointsâ€”particularly transport and logistics workers tasked with moving goods along the chainâ€”a huge amount of structural power and leverage, a fact employers are keenly aware of. As such, there is a growing body of research that deals with strategies to organise across and within supply chains that the report draws on and contributes to.

As the UK and Irelandâ€™s largest multisector trade union, strategically building and sustaining connections between workers in supply chains is something that Unite is uniquely placed to develop. â€˜Supply chain solidarityâ€™ elevates the role of rank-and-file union members and shop stewards to active participants and leaders in their own efforts to increase power in the workplace, but also, by extension, the global economy. By placing workers at the centre of a strategy to resist the negative industrial impact of free trade, it emphasises organising, collective bargaining, and international solidarity over advocacy. Such a strategy would be a key step forward in rooting union influence over world trade in the workplaceâ€”where workers can use their powerâ€”instead of the elite-level negotiations that fundamentally affect workersâ€™ lives and yet offer minimal avenues for union input.

The dominant economic model of â€˜free for allâ€™ trade seeks to divide workers and have us compete in a winner-takes-all â€˜race to the bottomâ€™. The ideas presented in the Unite report propose a starting point for piecing together what has been broken. It is a strategy based on an understanding that we do not work in isolation, but within the networks of supply, service, production, and delivery. The power of working people in the system of global trade comes from where it has always come from â€“ our collective strength, and the solidarity between us.

You can read the full report, â€˜A Collective Bargaining Strategy for Tradeâ€™, here.

This blog first appeared on the Tribune blog March 5th