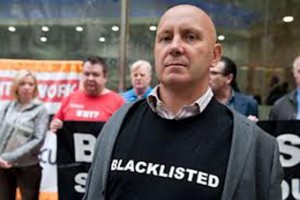 The legal case on the blacklisting of construction workers by The Consulting Association (TCA), took a new and positive this week when an EAT hearing ordered that construction company Carillion must face human rights claims. ┬Ā

Information uncovered in a 2009 raid on the offices of TCA by the Office of the Information Commissioner (ICO) led to compensation claims being filed against numerous firms, including Carillion, which subscribed to TCAŌĆÖs database of 3,213 workers.

Maria Ludkin, National Officer of the GMB, said of the case brought by Dave Smith, heard in London this week, where it was referred by Justice Singh to the High Court: ŌĆ£Carillion are saying they may be guilty but some other construction employers were worse than them. This is pathetic.┬ĀCarillion repeat the same statements whilst still refusing to explain their continued presence and attendance at ŌĆśsecurity meetingsŌĆÖ held at TCA right up until the raid in 2009.┬ĀIt will be for the High Court to decide if their ŌĆśLance Armstrong defenceŌĆÖ ŌĆō that they were not as bad as some of the other construction employers ŌĆō will provide them with effective legal protection. In effect they are saying they may be guilty but so is everyone else.ŌĆØ

Dave Smith, an electrician from Essex, took his case against Carillion to an Employment Tribunal in January 2012. In a judgment in March 2012 the judge said: ŌĆ£It seems to us that he has suffered a genuine injustice and we greatly regret that the law provides him with no remedy.ŌĆØ

He lost the case on a technical point that he was not directly employed by Carillion, who blacklisted him, but by an employment agency.

This weekŌĆÖs tribunal was the result of his appeal against that verdict. ICO have confirmed that Smith was one of 224 construction workers from around the UK suspected of having been blacklisted by Carillion.

A spokesperson for Carillion said they will be represented at the full hearing of an appeal ┬Āand that the company┬Ādoes not acknowledge any liability to Mr Smith and that they not engage in or condone blacklisting.

Meanwhile Unite electrician Frank Morris who was dismissed by Bam Ferrovial Kier, the consortium building the Crossrail project, after raising safety concerns at the Paddington site in September 2012 recieved some good news when an employment judge agreed that Crossrail and BFK should appear in court over Mr Morris’s claim that his sacking was linked to the illegal blacklist run by the Consulting Assocation.┬ĀCrossrail denies the allegations.

Unite general secretary Len McCluskey said the union fully backed the electrician from Enfield.┬Ā“Too many construction workers have had their lives ruined just because they had concerns over health and safety in one of Britain’s most dangerous industries or just because they belonged to a trade union,” he said.