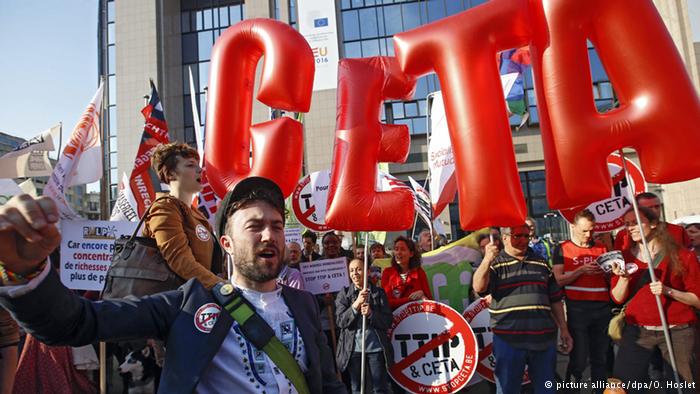 This weekend UK media has been widely reporting comments by Germany’s Vice Chancellor Sigmar Gabriel that the free trade negotiations between the European Union and the United States have ‘failed, after three years of talks – an agreement has yet to be reached’.

Discussions on the Transatlantic Trade and Investment Partnership (TTIP) have been unsuccessful, Germany’s Minister for Economic Affairs, Sigmar Gabriel, who is also the country’s vice chancellor, said.

“In my opinion the negotiations with the United States have de facto failed, even though nobody is really admitting it,” Gabriel told German broadcaster ZDF.

“Nothing is moving,” he added.

Gabriel, who heads the Social Democrats (SPD), and is likely to be their candidate to stand against Angela Merkel in the forthcoming election noted that after 14 rounds of talks, the two sides have yet to agree on even one chapter out of the 27 being discussed.

One of the reasons given for the breakdown in negotiations was that “we Europeans did not want to subject ourselves to American demands,” Gabriel said.

But it is worth noting Gabriel defended the EU’s free trade agreement with Canada, called the Comprehensive Economic and Trade Agreement (CETA.)

“The debate has become very difficult in that the agreement with Canada and the one with the USA have been lumped together,” Gabriel said, adding that this assumption is incorrect.

He praised the Canadian agreement, saying it was fairer for both sides. The Canadian-European deal is much further advanced and could be ratified in the near future.

Equally, there is suspicion that Gabriel maybe ready to dump TTIP to help get CETA through in Germany on the basis that the US could get much of what they wanted from TTIP by using US companies many of whom have subsiduaries and offices in Canada or could easily re-regaister them there..

German trade unions and other organizations have called for rallies across German cities on September 17th to protest the two trade agreements.

The above article is well worth reading as it sets out the opposition to TTIP and CETA in Germany.

It is worth noting at present there is a mixed response to CETA from German unions, with the giant services union ver.di coming out strongly against CETA but there are other unions who are sitting on the fence or accept CETA as it is.

Supporters of the TTIP hope to lock down the outlines of an agreement before France and Germany’s general elections in 2017 and before US President Barack Obama leaves office at the end of 2016.