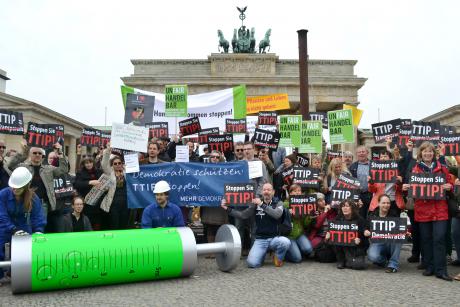 BDI The GermanÂ Bundesverband der Deutschen Industrie e.V. – (BDI) (the German equivalent of the the UKs CBI and one of the most fervent supporters of TTIP in Germany) has been forced to slash its estimate of the economic benefits for Europe of a proposed US-EU free trade pact by a factor of 10, it concededÂ on March 11th

The BDI had said online that the controversial trade deal would spell an economic boost of about 100 billion euros a year for the EU – roughly the economic benefit other experts forecast over a decade.

Following repeated questioning by Foodwatch, a non-government group, the BDI drastically revised down the estimates published on its website on the positive effect of a Transatlantic Trade and Investment Partnership, or TTIP.

“It is correct that our communication may have given the impression that an annual boost to the economy of 100 billion euros could be expected,” the BDI’s TTIP expert, Stormy-Annika Mildner, wrote in a letter to Foodwatch chief Thilo Bode.

BDI had “immediately corrected” the corresponding passage on its homepage and added additional explanations, Mildner wrote.

But it was “in no way … a conscious campaign of false or misinformation,” BDI insisted in the letter, a copy of which was obtained by AFP.

Foodwatch had accused BDI of purveying “grossly false information” about the trade pact.

According to an estimate drawn up by the Centre for Economic Policy Research for the European Commission, the TTIP agreement will boost the EU’s combined gross domestic product by 0.5% 10 years after its implementation.

Chancellor Angela Merkel said last week that she favours a conclusion of the free trade agreement this year, in the interests of “jobs and growth in Europe”.

But within the center-left Social Democratic Party, which shares power with Merkel’s conservative Christian Democratic Union in the coalition government, support for TTIP is much more tepid.

Germany is one of the countries where popular resistance to the deal is strongest, the EU’s trade commissioner Cecilia MalmstrĂ¶m recently conceded.

Campaigners in Europe are convinced that powerful interests are selling the consumer short in the secret negotiations.

The EU-US trade deal would not just slash the already low trade tariffs they share, but would also harmonise regulations to an unprecedented degree, affecting goods and services as far-ranging as Roquefort cheese and accounting.

But campaigners are opposed to many aspects. The most contentious part of the deal is a clause which would allow corporations to sue governments in tribunals that are above national law.