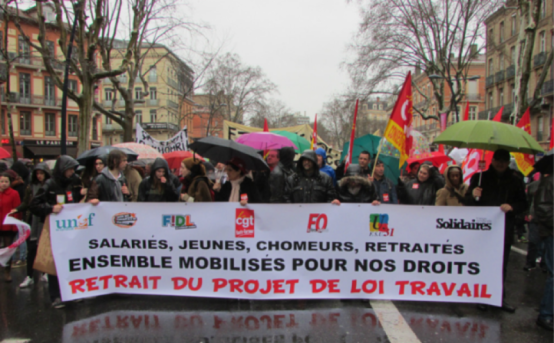 French unions took to the streets on March 31st to protest at the GovernmentŌĆÖs proposed changes to the ŌĆ£code du travailŌĆØ ŌĆō the countries labour law. Joined by students, over 400,000 joined the demonstration (Union sources said 1.2 million people were on the street). Protestors also clashed with the police at points along the route.

The GovernmentŌĆÖs proposals include flexibility in the implementation of the 35 hour week, limiting severance payments and making it easier to dismiss workers.

President HollandeŌĆÖs government has brought forward the proposals as part of a package to reduce unemployment and boost competiveness ahead of elections next year.

Unions say that the changes are a step backwards and opposition to the proposed changes is widespread. The Government has already been forced to revise the draft bill and to postpone its official adaptation in the council of ministers.

A leak that the Government was even considering using article 49-3 of the French Constitution to adopt legislation without the necessary majority was met with uproar and fierce opposition as well.

Hollande also moved the handling of the bill to a new minister the labour minister, Myriam El Khomri.

Changes have already been made and the revised bill no longer imposes a cap on severance pay for dismissed workers with new limits introduced as ŌĆśnon-binding guidelinesŌĆÖ for labour courts.

The Government also removed the proposal to allow companies with less than 50 workers to take unilateral decisions without agreement applying to workers subjected to on-call duty or pre-assigned overtime pay.

The Government also withdrew changes to rules on working from home and night working and has also introduced changes to ensure that multinational companies are stopped declaring ŌĆśartificial bankruptcyŌĆÖ of French companies in order to justify layoffs.

The current proposals on flexibility on the implementation of the 35 hour week would allow companies to organise ŌĆśalternative working timesŌĆÖ including allowing a working week of 48 hours and 12 hour shifts. In “exceptional circumstances,” employees could be allowed to work up to 60 hours a week.