FBU Will Fight Proposal To Remove Right To Strike 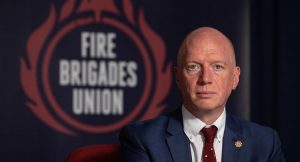 Matt Wrack FBU General Secretary: “The Chief Inspector of Fire and Rescue Services Sir Thomas P Winsor is making┬Ārecommendations that are untenable and unsupported by evidence.

The┬ĀFire Brigades Union has pledged to oppose the threat by Her MajestyŌĆÖs Chief Inspector of Fire and Rescue Services Sir Thomas P. Winsor ┬Āto ban the right to strike by firefighters in his annual report into state of fire and rescue services┬Āincluded an attack on firefightersŌĆÖ. Windsor is proposing the right right┬Āto democratically organise, including a recommendation to consider removing firefightersŌĆÖ right to strike.

Her MajestyŌĆÖs Chief Inspector of Fire and Rescue Services Sir Thomas P Winsor, author of ‘State of Fire and Rescue ŌĆō The Annual Assessment of Fire and Rescue Services in England 2021′, wrote: ŌĆ£It is unarguable that firefighters deserve fair pay; everyone does. But the continued threat of industrial action doesnŌĆÖt help anyone, least of all the public. Many services have told us that the threat can significantly adversely affect their ability to respond to incidents and that it is costly for them to provide contingency arrangements, particularly when, in some cases, resources are already scarce.

ŌĆ£We were also told that many firefighters are often conflicted in their choices; dissenting from union positions takes courage. The influence of the Fire Brigades Union (FBU) is considerable in some services. Sometimes, it goes too far and is contrary to servicesŌĆÖ values and behaviours, and to the public interest.

ŌĆ£The threat of industrial action isnŌĆÖt the only thing that is hindering progress. The outdated and ineffective structures for negotiating pay, terms and conditions are where reform is most needed. A significant number of periods of industrial action have taken place since 2001; two were national strikes. These were largely as a result of failed negotiations on pay and terms and conditions.

ŌĆ£Too often, the public havenŌĆÖt been served as they should because of the restrictive industrial relations arrangements in place.ŌĆØ

In response, Fire Brigades Union general secretary Matt Wrack pointed out that since 2010,┬Āone in every five firefighters has been cut from the service, saying: ŌĆ£It is not clear how removing firefighterŌĆÖs rights to democratically organise would help keep the public saferŌĆō in fact, having a fair structure where employers and employees can come together to work through issues, helps protect public safety. If Sir Tom Winsor was serious about improving the fire and rescue service he might suggest putting back some of the one in every five firefighters which have been cut since 2010.

ŌĆ£The criticism of the pace of change in the fire and rescue service lies at the door of central government. For more than a decade, the FBU has attempted to discuss what is expected of the service. The response has been endless evasion by government ministers. To blame firefighters and their union is an outrage and to suggest further undemocratic attacks on the rights of firefighters as workers is disgraceful.

ŌĆ£Support for collective bargaining is shared across the fire and rescue service, and to suggest otherwise is at best disingenuous, and at worst a lie, making his recommendations untenable and unsupported by evidence. The conclusions reached on the role of the union are simply WinsorŌĆÖs own opinions. He has a track record, across sectors, of attacking workers and the role of unions in line with what we can presume to be his own political beliefs.