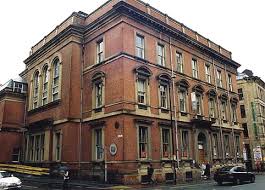 Manchester’s Mechanics Institute, venue of the 1st TUC Congress in 1868.

We can expect more trade union baiting at this years Tory Conference in the birthplace of the trade union movement – Manchester – the TUC was founded at the Mechanics Institute just off Princess Street in 1868.

According to the Evening Standard ToryÂ Party sources say they are considering a wide range of “reforms”, including scrapping check off of subscriptions (deduction of subs straight from workersâ€™ wage packets).Â The Tory front organisation the Tax Payersâ€™ Alliance are egging on the Tory party claiming that that unions receive subsidies worth some ÂŁ85 million from public bodies.

Among the attacks being considered are:

* Requiring unions to be charged a full commercial rent for using public buildings and facilities.

* Ending the right to free time off for trade union duties, including for officials who work as full-time union officials at the taxpayersâ€™ expense.

* Banning â€ścheck-offâ€ť of fees from salaries, which some public sector unions use to maintain membership.

* Increasing the threshold before a union can apply for statutory recognition from 10 per cent of a workforce to 30 per cent.

* Insisting that strike ballots do not count unless at least 40 per cent of members vote for it.

* Axing taxpayer funding of the Union Learning Fund, currently ÂŁ15.5 million, which pays for union officials to be trained.