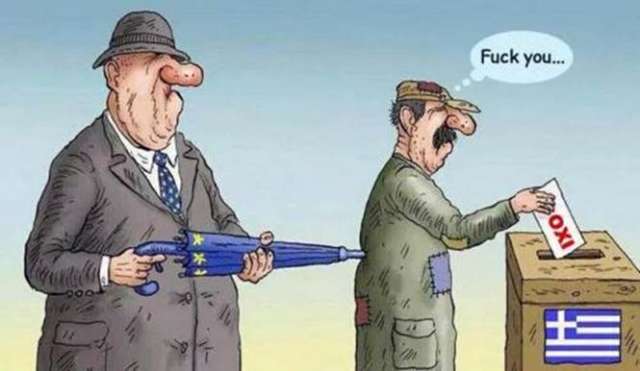 Reuters is reporting that Euro zone finance ministers meeting in Brussels want Greece to commit to more measures to reform its economic system and government finances before they agree to negotiate a bailout loan, including a major review of employment law and employment rights.

The following is a partial draft Eurogroup statement published Â by Reuters. It was discussed by the ministers late on Saturday, before they resumed talks on Sunday.

Euro zone sources said it was likely to be amended but formed a basis for further discussion on Sunday. Sources also said ministers had pressed Greece to take other measures, including passing early legislation increasing value-added tax and making the national statistics agency independent:

“The Eurogroup takes note of the request by the Greek authorities for a three-year ESM stability support and the accompanying list of policy commitments, including a comprehensive list of prior action. The Eurogroup reiterates the need for continued full involvement of the IMF.

The Eurogroup welcomes the assessment by the institutions that the list of policy commitments of the Greek authorities represents a basis to start the negotiations on a new program. The Eurogroup also agrees with the institutions that the package needs to be significantly strengthened and broadened in order to provide for appropriate conditionality for a possible three-year ESM program. The Eurogroup thus welcomes the additional following commitments of the Greek authorities on the basis of a clear timetable:

– fully comply with the medium-term primary surplus target of 3.5 percent of GDP by 2018, according to a yearly schedule to be agreed with the institutions;

– on labor markets, undertake rigorous reviews of collective bargaining, industrial action and collective dismissals in line with the timetable and the approach suggested by the institutions. Any changes should be based on international and European best practices, and should not involve a return to past policy settings which are not compatible with the goals of promoting sustainable and inclusive growth;

– carry out ambitious pension reforms and specific policies to fully compensate for the fiscal impact of the Constitutional Court ruling on the 2012 pension reform and to implement the zero deficit clause;

– adopt more ambitious product market reforms with a clear timetable for implementation of all OECD toolkit I recommendations, including Sunday trade, sales periods, over-the-counter pharmaceutical products, pharmacy ownership, milk, bakeries. On the follow-up of the OECD toolkit II, manufacturing needs to be included in the prior action;

– on energy markets, the privatization of the electricity transmission network operator (ADMIE) must proceed, unless replacement measures can be found that have equivalent effect, as agreed by the institutions;

– fully implement the relevant provisions of the Treaty on Stability, Coordination and Governance in the Economic and Monetary Union, in particular to make the Fiscal Council fully operational;

– adopt the necessary steps to strengthen the financial sector, including decisive action on non-performing loans, transposition of BRRD and measures to strengthen governance of the HFSF and the banks;

– develop a significantly scaled up privatization program with improved governance. A working group with the institutions shall provide proposals for better implementation mechanisms;

– amend or compensate for legislation adopted during 2015 which have not been agreed with the institutions and run counter to the program commitments;

– implement the key remaining elements from the December 2014 state of play of the fifth review of the second economic adjustment program.”