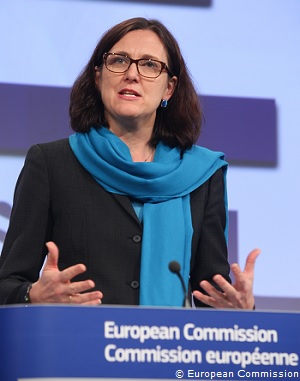 Sent in by Ben Davis of the USW.

Negotiations are underway to revamp the existing free trade agreement between Mexico and the European Union in a deal that will replace that signed in 2000, at a time when the EU has expanded significantly and Mexican production of talc, bentonite and kaolin, among other minerals, is surging.

Mexico has commenced negotiations with the European Union (EU) that could boost the Central American nation‚Äôs production and export of¬Ýbarite¬Ý(barytes),¬Ýquartz, granite and¬Ýsilica sand.

On average, two thirds Mexico‚Äôs deposits of these minerals remain unexploited, according to the country‚Äôs mining officials.

“This is the first time that the EU will amend an existing agreement,” said Francisco de Rosenzweig, undersecretary of foreign trade of the Mexican ministry of economy, referring to the incumbent Economic Partnership, Political Coordination and Cooperation Agreement that came into force in October 2000.

“The negotiations will take place during the rest of this year and the first quarter of 2016 and will allow Mexico to reach eastern European economies that became part of the EU in recent years. Afterwards, the results will be presented before the parties and put to consideration for approval,” de Rosenzweig told¬ÝIM.

According to the ministry‚Äôs general coordinator of mining, Mario Cantu Suarez, Mexico lacks the machinery, technology and human resources to explore, identify and quantify its mineral resources. These could be provided by a revised cooperation memorandum included in an updated deal.

“We need to find bigger deposits in order to make commercial prices of non-metallic minerals competitive,” he said.

“We have located some [mineral] beds of considerable size in the centre of the country, really close to the capital and in the neighbouring states of Puebla and Veracruz, but Mexico sometimes lacks the resources to explore the sites and separate those minerals from the rock ‚Äì something in which some European nations are specialised.”

Mexico is currently the eighth largest producer of barite in the world, according to Mexican government officials.

The potential for cooperation with European mineral companies is clear. For instance, agreements have been struck with Spanish companies to extract silica sand from deposits located in the Hidalgo state.

However, Mexico‚Äôs exporting costs for industrial and non-metallic minerals are still far from competitive due to transportation fees, which, according to the Mexican ministry of economy, impose $20/tonne in expenses.

“Considering the minerals are carried in ships that have 60,000-70,000 tonnes of capacity, it‚Äôs an expensive price, to which you also have to add the 7.5% mineral royalty. But finding bigger beds would compensate for these costs,” said Cantu.

The industrial minerals industry in Mexico has nonetheless reported significant production growth, according to the US Geological Survey (USGS). In 2012, there was a major increase in¬Ýtalc¬Ýproduction, which has surged 804% year-on-year, in addition to significant increases in fuller‚Äôs earth, or calcium¬Ýbentonite¬Ý(which increased by 111%),¬Ýkaolin¬Ý(up 35.6%),¬Ýgypsum¬Ý(up 31.8%), andwollastonite¬Ý(16.2% higher than in 2011). Cantu suggests these increases, on top of small base numbers, will continue.

¬ÝFigures provided by the Mexican government show this growth trend has also been registered in its trade with the EU, with an increment in¬Ýfluorspar¬Ýtrading numbers (worth $51.5m in 2013 and $61.2m in 2014), and bismuth ($11.4m in 2013 to %18.1m the next year). Non-metallic minerals account for around 30% of all mineral exports to the EU, while the rest involve metallurgic products.

EU Trade Commissioner Cecilia Malmstrom has been pushing the revamp of the deal, announcing her plans on 11th May at a Centre for European Policy Studies (CEPs) conference entitled Upgrading the EU-Mexico Free Trade Agreement, which the Mexican Secretary of Economy (minister) Ildelfonso Guajardo also attended.

Malmstrom wants to model the updated FTA on the Comprehensive Trade and Economic Agreement (CETA), which the EU struck with Canada last year and is pending ratification, as well as the planned EU-US Transatlantic Trade and Investment Partnership (TTIP).

The update is especially needed, given 13 member states have joined the EU since 2000 and industries on both sides of the Atlantic Ocean have been calling for the FTA to be expanded further than simply lifting tariff barriers.

The EU nevertheless views the existing FTA as a success-story and mineral products trade flows have been healthy. However, Mexican mineral exporters gained slightly more than their European counterparts through the agreement, according to a study into the effects of the trade pact by BBVA Compass Consulting and Benefits, which was unveiled at the CEPS conference. The study showed that “mineral products” were among the 10 economic sectors enjoying the largest positive impact on EU exports.

The rise in trade perhaps comes as no surprise, given that the FTA agreement includes a “cooperation on mining” clause in which both parties pledge to promote cooperation in “exploration, exploitation and profitable use of minerals”, as well as exchanging information, experience, experts and technology. The clause also allows for joint research, technological development and investment.

Moreover, the agreement‚Äôs focus on lifting tariff barriers means the two partners now¬Ýapply zero tariffs to most mineral imports from each other, apart from a few exceptions, where the levies are nevertheless extremely low.

Although Mexico retains restrictions on foreign direct investment, which the EU wants to tackle in the new agreement, the FTA eased the way for Mexican multinationals to establish in Europe both in the EU and neighbouring countries.