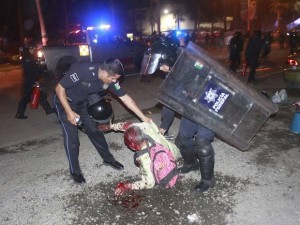 Mexican police attack teachers during a demonstration in support of union organisation.

We have TTIP, CETA, TPP (and ‘Fast Track’), TiSA and proposed neo-liberal trade deals being talked about between the EU and Japan and now Mexico and the EU are looking to do a trade deal!

MexicoĀ is one of the worst global offenders when it comes to attacking trade unions and workers rights, with aĀ government which promotesĀ a policy of ‘yellow unionism” – company backed unions with no teeth whose main purpose is to keep workers in check.

Workers at a number of multi-national companies have had yellow unions imposed on them or have faced brutal repression including at Honda, the Finnish company PKC, the Fiat owned Teksid, not to mention an all out war against the metal and mineworkers union Los Minero’s whose leader Napoleon Gomez was forced into exile in Canada by the Mexican Government. Napoleon was placed on Interpol’s ‘red” list but has been acquitted of all the false charges brought against him by his own country.

Under the NAFTA trade deal the US lost almost 600,000 manufacturing jobs many of them to “low cost” regions south of the US border and Mexico where trade unions face regular attacks.Ā Read more hereĀ and here

US unions warned Government about the loss of jobs to Mexico – and even former Presidential candidate Ross Perot called it “a giant sucking sound”Ā as jobs went south.

The Mexican Government has been accused of vicious crackdown’s on unions and union officials including beatings and violence against trade unions such as happened this year against teachers who were organising protests related to missing student teachers.

Following the collapse of global trade talks, the world’s biggest economies are seeking to sign a patchwork of bilateral and regional deals to lift economic growth and compete with China, which the West sees as too dominant in commerce.

“With the United States and Canada being two of our biggest partners, it would be an omission not to modernise Mexico’s agreement,” Mexican President Enrique Pena Nieto told a news conference after an EU-Mexico summit in Brussels.

“MexicoĀ has to align with them,” he said of the United States and Canada, with which MexicoĀ signed the North American Free Trade Agreement two decades ago.

Building on a pact withĀ MexicoĀ from 2000, the European Union hopes to addĀ MexicoĀ City to an emerging transatlantic free-trade zone. Negotiations could start at the end of the year.

MexicoĀ is also moving ahead of BrazilĀ whose talks towards a similar deal with the European Union have stalled, although efforts are being made to restart those negotiations.

As with the EU’s pact with Canada and its plans for a deal with the United States, a new accord withĀ MexicoĀ would further open up markets in services and allow businesses to bid for public tenders in each others’ countries.

Such accords go beyond trade and tariffs to integrate economies to adapt to global supply chains in which many elements from a range of countries make up a final product.

MexicoĀ buys most of its goods from the United States andĀ China, but the European Union remains a way forĀ MexicoĀ to reduce its reliance on the world’s two biggest economies.

The European Union has initialled theĀ CETA deal with CanadaĀ Ā that must be ratified and is negotiating with United States on TTIP, which if agreed would be the largest of its kind, encompassing almost half the world’s economic output and a third of global trade.