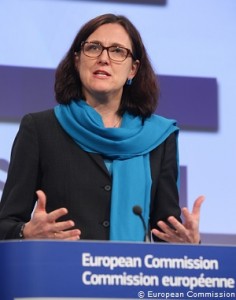 Celia Malmstrom – kills off speculation of restart of TTIP talks.

European Union Trade Commissioner Cecilia MalmstrĂ¶m responded to U.S. Commerce Secretary Wilbur Ross’ optimism about resuming U.S.-EU trade talks by listing actions the U.S. has taken over the past year that she said would make it difficult to start again.

Ross, speaking at the World Economic Forum in Davos, Switzerland, on January 24th, said it was no accident that the U.S. withdrew from the Trans-Pacific Partnership but not the Transatlantic Trade and Investment Partnership negotiations with the EU – a point he has made before.

The TTIP talks have not progressed since EU member state trade ministers in September 2016 decided a deal could not be reached with the Obama administration. They have remained dormant since the Trump administration took office in January 2017.

In his remarks, Ross took shots at Europe by saying it was no longer appropriate for the U.S. to subsidize European countries and dismissing the notion that the EU’s economy was more open than the United States’.

But MalmstrĂ¶m told reporters in Davos that after one year of the Trump administration there were “lots of trade irritants” between the U.S. and EU.

As an example, MalmstrĂ¶m said the U.S. has tightened Buy America provisions on government procurement. In April 2017, President Trump signed an executive order that directed government agencies to examine waivers and exceptions to Buy American laws, with the intent of closing those “loopholes.” A report required by that order has not been released.
Public procurement market access was a key offensive issue for the EU in the TTIP negotiations and was a major sticking point in the talks. The EU saw the U.S. market access offer in that area as insufficient. The U.S. justified its offer by saying its procurement market was already more open than the EU’s, a contention heavily contested by the EU.
MalmstrĂ¶m also said the EU was concerned with actions the Trump administration could announce as a result of its Section 232 investigation into the national security implications of steel imports.

The Commerce Department’s decision to levy duties on Spanish olives is another trade barrier of concern to the EU, MalmstrĂ¶m said.

EU Commission spokesman Daniel Rosario told reporters on January 29th that the TTIP talks have “effectively stopped,” noting that the EU would have to complete an internal assessment before resuming the negotiations.

The EU must clarify if there’s a sufficient level of “shared ambition and common ground before deciding whether and how to proceed with new negotiations,” he said. “We are engaged with the United States to work together for a positive, ambitious and mutually beneficial trans-Atlantic trade agenda.”

Further imperiling the resumption of the TTIP talks, MalmstrĂ¶m on January 25 said participation in the Paris Agreement on climate change was a necessary prerequisite for negotiating a trade agreement with the EU. President Trump announced a U.S. withdrawal from the accord in June after decrying it throughout the presidential campaign.

When told had Ross suggested resuming TTIP, she replied, “Did he? He hasn’t contacted me.”

She also criticized a comment Ross made to reporters about sending U.S. trade troops to the “rampart.”

Trump heightened the trade rhetoric over the weekend, telling Good Morning Britain on January 28th that he has “a lot of problems with the European Union” that “may morph into something very big” from “a trade standpoint,” according to media reports.

“The European Union stands ready to react swiftly and appropriately in case our exports are affected by any restrictive trade measures from the United States,” he told reporters.

Thanks to Ben Davis at the United Steelworkers