Enhancing The Role Of The Unions by Len McCluskey 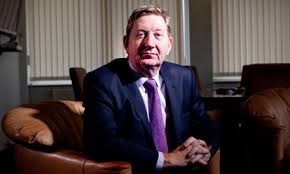 The biggest issue confronting our unions and their members over the past 30 years has not been the sharp decline of trade union membership and density but the even sharper decline of a key economic function performed by trade unions – the precipitous collapse of the coverage of collective bargaining.

When the last Conservative government of Margaret Thatcher came to office in 1979 82% of workers in the UK had their main terms and conditions determined by a union negotiated collective agreement. Now, the latest figures show that the coverage is down to 23%. The result is that the share of national income going to salaries and wages has fallen from 65% in 1980 to 53% in 2012.

Looked at another way, currently the top 1% of UK earners currently pay 30% of income tax. But when Thatcher came in, this same 1% only paid 11% of the total tax take – the reason being that incomes were more dispersed; now theyŌĆÖre concentrated at the top.

The answer lies partly with the anti-union laws introduced in the 1980s and ŌĆś90s and partly because the state has withdrawn support for collective bargaining as part of the free market ideology of de-regulation of all markets, including the labour market.

ItŌĆÖs ironic – to say the least – that de-regulation of the labour market requires the tightest regulation of one of the key players in that market, the trade union movement.

We canŌĆÖt say that we werenŌĆÖt warned about the rightŌĆÖs distaste for collective bargaining, the neoliberal counter-revolution has had a long gestation period.

Mrs ThatcherŌĆÖs favourite guru, Professor Hayek wrote in 1960 that the elimination of collective bargaining had to be a top priority. ŌĆ£It would be necessary ŌĆ” to rescind all legal provisions which make contracts concluded with the representatives of the majority of workers of a plant or industry binding on all employees and to deprive all organised groups of any right of concluding contracts binding on men who have not voluntarily delegated this authority to themŌĆØ.

It is right that the enhancement of the National Minimum Wage into a Living Wage would lift many workers in the poorly organised and almost informal sections of the labour market out of poverty. However, it is collective bargaining that would have a real redistributive effect – as the lack of it has shown by the concentration of income among the already well off.

Strangely then, when the Cameron Government assumed office in 2010 the Prime Minister was reported as saying that the Government had no plans to legislate further on trade unions ŌĆō which turned out to be an untruth to say the least. What the Government did do – with Vince Cable religiously following the path set for him by the man behind Wonga loan sharks Adrian Beecroft – was to launch an assault on individual rights at work.

These rights, many of which date from the late 1960s and early 1970s, were often introduced as a way of heading off trade union militancy.

Vince CableŌĆÖs big launch was in November 2011 when he announced a 15 point reform plan, including:

Labour, led by Ian Murray MP, opposed most of the Beecroft proposals as they passed through Parliament, mainly as the Enterprise & Regulatory Reform Act, so we may expect some progress on individual rights at work from the incoming Labour Government.

The Government has not had everything its own way with employment rights reform. The first reverse it suffered was with a policy clearly identified with Chancellor George Osborne.

In 2012, Osborne outlined plans to not just further erode employment rights but to change the status of ŌĆ£employeeŌĆØ to some other sort of worker who would have a stake in the equity of the enterprise. This is now part of the Growth & Infrastructure Act, 2013.

Employers are now able to make new job offers conditional on ŌĆō and offer existing staff ŌĆō this new arrangement. Employees will be given at least ┬Ż2,000 in shares in the business, exempt from capital gains tax when they sell.

In return, the employees will give up their rights on:

They will also be required to provide 16 weeksŌĆÖ notice of a firm date of return from maternity leave, instead of the current 8.

The unions and most major employers have had nothing to do with this – a flagship policy, although on the Statute Book, that has sunk without trace!

With little or no resistance from their Liberal Democrat junior partners the Tory Party found it difficult not to use its position in government to attack trade unions.

In response to the expose of corrupt practices in Parliament (cash for questions) in 2013 the Government legislated against trade unions, and other civil society organisations, in the Transparency of Lobbying, Non-Party Campaigning & Trade Union Administration Act that will:

To its credit, the Labour Party has given a commitment to repeal this law if it should win the next General Election.

The Carr Inquiry received no support from trade unions and only patchy support from employers. The terms of reference of the Carr Inquiry were to provide an assessment of both the alleged use of extreme tactics in industrial disputes, including so-called ŌĆśleverageŌĆÖ tactics; and the effectiveness of the existing legal framework to prevent inappropriate or intimidatory actions in trade disputes.

In advance of Carr reporting, the Prime Minster announced in May 2014 that new restrictions will be introduced on strikes in `essential’ services if the Conservatives were to win the 2015 general election.

Furthermore, Conservative members of the government responded to the public sector strikes held in July 2014 not by seeking a resolution of the issues but by suggesting that further reform of trade union law was necessary.

The Conservatives said that they would seek to legislate in two areas:

In August 2014 clearly worried by these pre-emptive policy announcements made by the Conservatives on how they were to legislate against the unions after the next General Election Bruce Carr threw in the towel:

ŌĆ£ŌĆ” I have become increasingly concerned about the quantity and breath of evidence that the Review has been able to obtain from both employers and trade unions ŌĆ” I am also concerned about the ability of the Review to operate in a progressively politicised environment in the run up to the General Election ŌĆ” I have reached the conclusion that it will simply not be possible for the Review to put together a substantial enough body of evidence from which to provide a sound basis for making recommendations for change ŌĆ” the Review will produce a scaled-down report ŌĆ” but will make no recommendations for change.ŌĆØ

For the past 30 years all across the globe, where ever the neo-liberal writ runs, trade union and workersŌĆÖ rights have been rolled backed. None more so than in the Mediterranean countries that have been subject to an IMF/ECB/EU ŌĆ£bail outŌĆØ. In Greece, Spain and Portugal employment law and workersŌĆÖ rights have been changed in similar ways as an integral part of the imposed package of structural adjustment. The UK however, seems to be the only country that is seeking to make these changes voluntarily.

An incoming Government could chose to enhance the role of trade unions for any one of three reasons:

On 10 December, 1948 the General Assembly of the United Nations adopted and proclaimed the Universal Declaration of Human Rights. Article 23 (4) of which says: ŌĆ£everyone has the right to form and to join trade unions for the protection of his interestsŌĆØ.

The International Labour Organization (ILO – a specialist agency of the United Nations that deals with industrial relations and employment issues) published ILO Convention 87 on Freedom of Association and Protection of the Right to Organise in 1948 which was ratified by the UK on 27 June, 1949.

The Convention, which has the standing of an international treaty, says:

ILO Convention 98 on the Right to Organise and Collective Bargaining was published in 1949 and ratified by the UK on 30 June, 1950. It says:

The European Convention for the Protection of Human Rights and Fundamental Freedoms was adopted by the Council of Europe in 1950. Article 11 of the Convention states:

The European Court of Human Rights, established by the Convention, has shown in 2008 and 2009 in two cases involving the Turkish Government that trade union rights are human rights and that there is indeed an internationally protected right to bargain collectively and to strike – small wonder that the constant cry from the Conservatives is that the UK should withdraw from its treaty obligations on human rights!

Articles 5 and 6 of the European Social Charter of 1961, ratified by the UK, say very much the same as ILO Conventions 87 and 98 on the right to organise and bargain collectively with Clause 4 of Article 6 explicitly recognising that workers have a right to strike:

As does Article 28 of the Charter of Fundamental Rights of the European Union 2000 (notwithstanding the protocol negotiated by the UK Government in 2009 against extending the competency of the European Court):

There is now a mass of research that conclusively shows that there has been a major shift in income and wealth to the already wealthy over the past thirty-five years. Richard Wilkinson and Kate PicketŌĆÖs ground breaking work in The Spirit Level plus the Poverty & Social Exclusion project and work by the Joseph Rowntree Foundation lead the way in exposing this unwelcome trend.

To quote from some of these findings:

Only those with a wilful disregard of the evidence, or those who were biased in favour of the rich, could fail to make the link between these findings and the trends described at the beginning of this article.

The neoliberal project, as outlined by Hayek, to smash collective bargaining, to restore to the ruling elite that which was taken from them on the global stage by the New Deal and the post war victory of social democracy in western Europe has worked only too well.

The precipitous decline in the coverage of collective bargaining is clearly correlated with diminishing real term incomes for large numbers of working people, which is more recently compounded by the austerity measures being pursued by the Coalition Government.

Any incoming government interested in paths from austerity and in a redistributive society must surely restore to the unions the right and opportunities to bargain collectively on behalf of their members and to create the conditions where the employers are bound to engage in this process.

This article by Len McCluskey is Chapter Eleven in “What The Three Main Parties Are Not Telling You: A Radical Way Out Of Stagnation and Inequality” edited by Michael┬ĀMeacher.