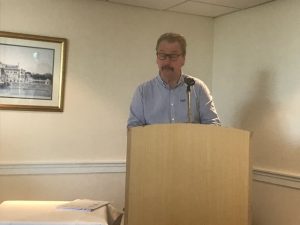 It is well known that trade union membership has declined dramatically since the advent of Thatcherism and neo-liberalism; from highpoint of 13 million in 1979 itās down to fewer than 6 million today.

In terms of the proportion of workers in the workforce who are union members, it has fallen from a highpoint of 54% to fewer than 25% today.

But the most important statistic behind the headlines is not the decline of trade union membership but it is the precipitous collapse in the coverage of union negotiated collective agreements.

Collective bargaining ā at its highpoint in 1980 meant that 86% of UK workers went to work on union negotiated terms and conditions, that figure has fallen to 20% today.

The impact of the collapse of the coverage of collective bargaining is that the share of GDP going to salaries and wages has fallen from about 58% in 1980. In the subsequent 25 years that share has been as low as 51%.

In pounds sterling this means that although in the early years of this decade a middle income worker was on slightly more than Ā£25,500 pa

ā¦ if wages had kept up with economic growth since 1980 that figure would have been slightly less than Ā£33,500 pa ā¦

ā¦ in other words workers are Ā£7,000 pa worse off than they otherwise would have been.

Itās the loss of ātrade union powerā which translates as the collapse of collective bargaining that has led to (a) workers getting poorer and (b) the uberisation of work in the period of neo-liberalism.

As Prof Richard Wilkinson notes the simultaneous collapse of collective bargaining and working class living standards are not merely correlated but the latter is causally related to the former.

And itās the framework of anti-union laws introduced under Thatcher and Major in the 1980s/90s allied with the anti-union shift in public policy that were intended to do just that.

We can dismiss Conservative talk about the inequities of the closed shop or giving unions back to their members.

The legal shackling of union bargaining power was a deliberate move to restore to the 1% that which they had lost in the post-war period of social democratic advance.

They were explicit about it ā one of the 1980s laws removed from ACAS an obligation to promote collective bargaining.

This dire legal situation has been compounded by the passing of the Trade Union Act 2016 that will only exacerbate the situation.

Firstly, we have the growth of poorly paid, precarious employment ā what the Wall Street Journal recently called āthe end of employeesā.

Secondly, more generally, we have had a 30 year collapse of working class living standards and a shift of income and wealth back to the 1%.

The cause of both of these phenomena has been, to a greater or lesser extent, the legal shackling of the unions and the shift in public policy away from collectivism.

The current, and temporary, Prime Minister has commissioned Matthew Taylor, the Chief Executive of the Royal Society of Arts, to look at how employment practices need to change in order to keep pace with modern business models ā in other words precarious contracts.

It is quite likely that Taylor may recommend the regulation of individual workersā employment arrangements to move away from, say, bogus self-employment but refrain from recommending any improvement to workersā collective position through trade union organisation.

Labour, more boldly and comprehensively, launched Workplace 2020, a consultation with working people to come up with a new settlement of rights that has been overtaken by the snap General Election.

Under Jeremy Corbyn and John McDonnellās leadership Labour had already signposted the direction it wished to travel.

We will give people stronger employment rights from day one in a job, end exploitative zero hours contracts and create new sectoral bargaining rights. We will strengthen working peopleās representation at work and the ability of trade unions to organise, so that working people have a real voice at work. And we will put the defence of social and employment rights, as well as action against undercutting of pay and conditions through the exploitation of migrant labour, at the centre of the Brexit negotiations agenda for a new relationship with Europe.

But the tone set by Corbyn and McDonnell and the parallel think tank document produced by the Institute of Employment Rights A Manifesto for Labour Law ensured a progressive offer on labour rights in Labourās Manifesto.

Labour is offering a 20 point labour rights reform programme including most importantly a commitment to sectoral collective bargaining to restore to people at work that which they have lost in this 35 year long neo-liberal nightmare.