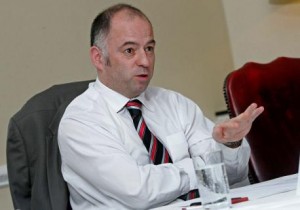 Published in The Journal, March 25th

It has been difficult this week to extinguish thoughts of ā1984ā.Ā The double-speak from toxic Chancellor George Osborne at last weekās Budget beggars belief. Yet again the growth forecast for the UK economy has been revised down, this will be the third consecutive year of below-1% growth; the central, critical, economic goal of halving the deficit is way off track; it is likely the UK will have its financial ratings further downgraded this week too ā yet the only concession to this apparent failure was to note that recovery was ātaking longer than expectedā, which translates as longer periods of high unemployment in the North East.

The evening before the Budget Osborne also suffered a significant defeat in the House of Lords when several coalition peers joined Labour and cross-bench Lords to vote against one of the Chancellorās more stealthy efforts to undermine employment rights.

At the Tory Party Conference the notion of workers surrendering employment rights in return for receiving shares from the company was applauded to the rafters.

Any measure that seems to undermine hard-fought employment rights that provide basic standards in the workplace is celebrated with abandon among the Conservatives who, supported by the Liberal Democrat coalition partners, are actively reducing these minimum standards now, despite the lack of evidence that challenges the view that the only outcome will be greater unfairness in the workplace.

Efforts by this Government to drive as many public services as possible into the private sector are well understood. It seems, however, that even die-hard Conservatives think Osborne is going too far by trying to commoditise employment rights with a number of former cabinet ministers in the Thatcher government against the proposal.

Nor is there any demand from employers to utilise this bonkers proposal which, in itself, is completely impractical. Workers doing the same job, same level of experience and length of contract, with different sets of employment rights. This hardly fits into the ābusiness simplification ā red tape challengeā approach to removing āunnecessaryā burdens on employers.

Cross-bencher and former Deputy High Court Judge, Lord Pannick, perhaps summed it up best, saying, āTo allow these basic employment rights to become a commodity that can be traded ā¦ frustrates the very purpose of these entitlements as essential protections for the employee, who lacks effective bargaining power.ā

Some things are not for sale; employment rights are included in that.