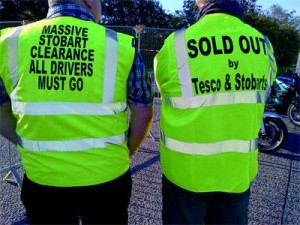 A demonstration to highlight how bosses are exploiting workers when they are transferred to another employer will take place in Doncaster on Saturday 16th November.

The South Yorkshire town has been chosen because it was the centre of a bitter dispute last winter when 183 Unite drivers were transferred from Tesco to┬ĀEddie Stobart Ltd (ESL) under┬ĀThe Transfer of Undertakings and Protection of Employment (TUPE) regulations.

Unite argues that the government is intent on watering down even further the TUPE regulations which are designed to protect the pay, and terms and conditions when workers are transferred to a new organisation.

Unite will be marshalling members and activists at┬ĀDoncaster Rovers football ground at 11.00am┬Āon 16th November┬Āfor a march┬Āpast the gates of the Tesco depot┬Āand through the town before┬Āreturning to the football ground for a rally.

Unite national officer Adrian Jones said: ŌĆ£The TUPE regulations were introduced to give some protection and security to workers who are directly affected by employers choosing to outsource work to a contractor.┬Ā

ŌĆ£While Unite has worked for years within the law, it seems more and more employers are now exploiting the legislation to their advantage – and the disadvantage of our members.┬Ā

ŌĆ£Meanwhile, the government is looking to change the regulations to give employers even more freedom to change terms and conditions, and put jobs at risk.┬Ā

ŌĆ£It is now time to bring this issue to the fore and let people know that exploitation through the TUPE process is unacceptable.

ŌĆ£TUPE is an issue that will increasingly affect more and more workers, either directly or indirectly, as employers look to move work around to cuts costs to the bone.┬Ā

ŌĆ£This is not about looking for more pay for our members, but simply to give workers the confidence that their futures will not be at risk if their employer makes a business decision to transfer work.┬Ā

The origins of the┬ĀStobartŌĆÖs Doncaster dispute go back to August 2012 when the transport workforce was transferred from Tesco to ESL and then, in September 2012, ESL issued notice of termination of employment, with no promise that the drivers would be re-employed once the 90-days were up.

┬ĀIt was this action that sparked the four month dispute┬Āwhich ended with 183 drivers being made redundant.

Unite is currently pursuing a legal challenge against ESL over the unfair dismissal of the drivers and for a protective award for lack of proper consultation during the TUPE process.┬Ā

The hearing is scheduled for February 2014.