Demanding the right to collective bargaining 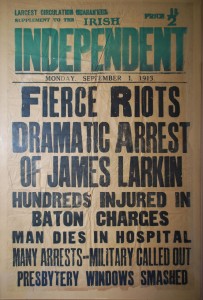 Last Friday I attended an event in New York to celebrate the hard work, diligence and activism of 100 Irish American trade union activists. It was a very special occasion. It was held in the Sheraton Hotel on seventh avenue where the night before almost 800 people took part in the annual Friends of Sinn FĆ©in annual fundraising dinner.

The Labour event was also a celebration of the centenary of the Dublin Lockout of 1913 which many trade union leaders in the USA acknowledge was a pivotal moment in the development of the world-wide trade union movement.

The Dublin Lockout involved about 20,000 workers who went on strike for recognition; better conditions and pay.Ā It was a long and bitter battle againstĀ tyrannical bosses.

One result of the Lockout was the founding 100 years ago this month of the Irish Citizen Army to defend workers and promote workers rights. Three years later in seeking to advance those goals the Citizen Army played a key role in the Easter Rising against British Imperialism.

āØWorkers in Ireland were not alone in battling for better conditions and wages. 100 years ago all around the world workers were coming together in trade unions and workers collectives.

The same year of the Dublin Lockout, the USA experienced its first general strike when 50,000 silk workers in Patterson, New Jersey struck for five months in order to win shorter working hours and better conditions. And while the starving workers returned to work without winning all their demands, their protests continued until in 1919 when they finally secured an eight-hour day.

Ā Many Irish workers who fled hunger and poverty, injustice and political repression came to play a vital role in the trade union movement in the United States.Ā Among these was the inspirational figure of James Connolly. He spent 7 years of his life in the USA where he helped establish and organise the Independent Workers of the World. Connolly also understood the importance of freedom from Britain and its linkage to the rights and freedoms and future prosperity of workers.

Ā We are proud of James Connolly. We are proud of his record in defense of American Labour. We are also proud of the role James Connolly played in the fight for Irish freedom. In 1914 Connolly wrote that the damage the partition of Ireland would bring, especially in respect of workers rights would be ādisastrousā.Ā He warned that: āAll hopes of uniting the workers, irrespective of religion or old political battle cries will be shattered.ā

Ā The history of the last 100 years is evidence of the truth of Connollyās words.Ā Partition created two conservative states in Ireland. It stunted the economic, social and political potential of this island. It divided worker against worker north and south, and strengthened sectarian divisions within the north.Ā It is that legacy that this generation of Irish republicans is determined to resolve.

Ā In my conversations with American trade union leaders it was clear that we and they share our opposition to the policies of austerity.

Ā In the north and despite having no mandate, the British government has imposed cuts which have seriously undermined the Executiveās ability to provide an economic and peace dividend.

Ā In the south the determination of Fine Gael and Labour to stick to austerity is causing enormous difficulties for families. Some 415,000 people or 14% are on the live register while 300,000, mainly young people, have emigrated in the last four years. 1700 are fleeing the state every week. They have gone to Canada and Australia and to the USA.

Ā It is a shameful indictment of successive Irish governments that citizens have no expectation that a young person can be born, grow up, live, work, prosper and grow old in the land of their birth.

Ā It is also an indictment of successive Irish governments and of the leadership of the Labour movement that 100 years after the lockoutĀ the Irish state is only one of three EU member states in which workers have no legislated right to workplace representation āno right to negotiate the terms and conditions of their employment.

Ā Austerity condemns one in ten children to consistent poverty with 47% of households living on less than ā¬100 a month after bills.

Ā It is a truism that there are employers who do not believe in wasting a good recession. For right wing elites a recession is an opportunity to drive down wages; sack workers; hire others at cheaper rates; cut overtime payments; demand longer hours for less, and ignore the trade unions.

Ā If there is to be a lasting legacy out of the 1913 Dublin Lockout it must be the right of workers to choose their own representatives and have them bargain collectively on their behalf. That means increasing pressure on the government to legislate for this.

Ā It also means building alliances on social and economic matters with others in Ireland and abroad, who share our opposition to austerity.

Ā It means getting back to activism; to organising, to campaigning, to recruiting, to agitating for the rights of workers, including unemployed workers, the poor and demonstrating across all employment sectors.

The vast majority of people want a society that is based on values of social justice, fairness, equality and decency. I firmly believe that this can be achieved if we work together.