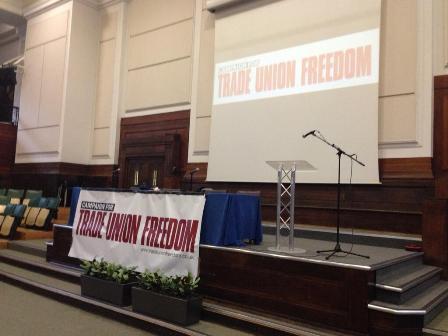 Billy HayesÂ told a new trade union campaign group last Saturday that the labour movement is “beginning a new fight” to win back the rights that successive governments have taken away.Â

Speaking to the Campaign for Trade Union Freedom (CTUF), Billy lambasted the Conservative-led coalition government, accusing them of waging a “class war” against trade unions and of “a defiance of reality” in their “failed” economic programme.

CTUF has emerged as a result of the coming together of two longstanding trade union rights campaigns – the Liaison Committee for the Defence of Trade Unions and the United Campaign – and hundreds of delegates representing hundreds of thousands of workers gathered for the central London launch rally.

During the 1980s and 1990s, legislation restricting unions’ ability to take industrial action has made UK labour law among the toughest in the democratic world. Workers acting collectively in defence of their interests are regularly subjected to legal challenges by employers making full use of these laws to frustrate their employees.

In his speech, the leader of Britain’s biggest union, Unite general secretaryÂ Len McCluskey, urged Labour leader Ed Milband to commit himself to improving the law if he wins the next election, and called on Labour to adopt a “radical programme, including the return of trade union rights.”

Veteran labour lawyerÂ John HendyÂ highlighted the impact of the anti-union laws on workers’ rights, explaining that, since 1979, the proportion of workers covered by collective agreements on wages and conditions had dropped from 82 per cent to just 23 per cent union leaders.

CTUF will be organising further events and activities in the coming months in order to raise the issue of workers’ rights and the need to win justice and dignity at work.

Summing up the significance of the launch, Billy Hayes said: “The launch of the Campaign for Trade Union Freedom could prove to be one of the most important events of 2013. The CWU is fully behind this initiative.”

To check if your CWU branch is affiliated and for more information visit theÂ Campaign for Trade Union Freedom.