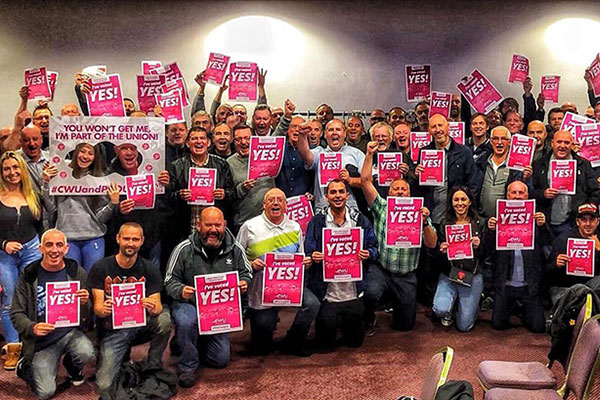 The CWU has lost its case against Royal Mail in the High Court today in a travesty of justice.¬Ý

The CWU had carried out a legal ballot to defend jobs and working conditions in the Royal Mail. Over 97% of members voted for action with a massive turn out by CWU members who took part in the balloting process.

Rather than getting round the table and resolving the dispute with the CWU the Royal Mail sought an injunction against the CWU on minor technicalities connected with postal voting.

Royal Mail claimed the union had ‘interfered’ with the ballot process and therefore the 97% result in favour of strike action was invalid.

One of the High Court judges said the decision had also been made because of the impending General Election.

But it is understood that the¬Ýcase turned on the current requirement for ‘postal only’ balloting.

The union argued it had done nothing wrong but the ruling means the strike action planned before Christmas cannot go now ahead.

Following the result, the union tweeted: ¬Ý‚ÄúThe High Court has ruled against us. Genuinely this is an utter outrage. 110,000 workers vs the establishment.

‚ÄùStand strong. We will not be moved.

CWU general secretary Dave Ward said: ‚ÄúNot one single person out of 110,000 who were balloted complained to Royal Mail that their right to vote was interfered with.

‚ÄùNot one single person out of 110,000 who were balloted complained to the independent scrutineers that their right to vote was interfered with. The Electoral Reform Society, who conducted the ballot, confirmed it was run in full accordance of the law.‚Äù

Tony Kearns the senior deputy general secretary of the CWU has tweeted the union intended to appeal the decision.