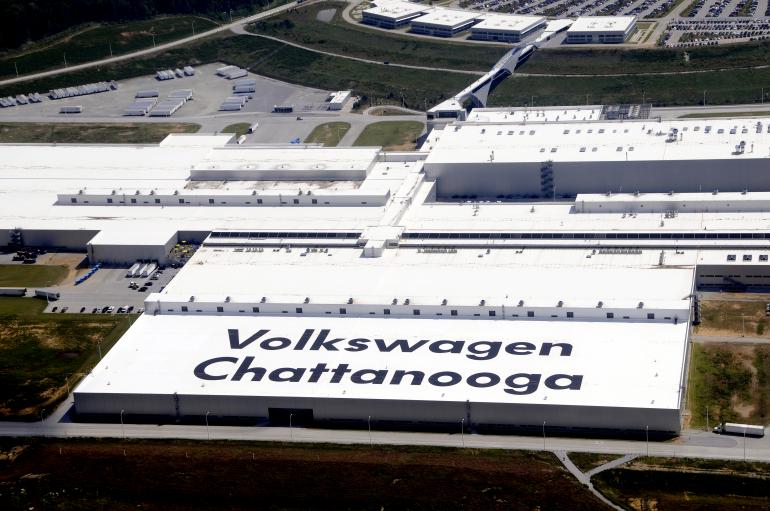 In a long-awaited ruling on April 14th, the U.S. National Labor Relations Board (NLRB) rejected Volkswagenâ€™s request that it nullify the vote of skilled trades workers at the Chattanooga plant to form a union with the United Auto Workers (UAW).Â  The decision means that Volkswagen is now obligated to begin negotiations with the UAW for a first collective bargaining agreement.

Volkswagen, however, has not made its intentions clear.

After the ruling a spokesperson said the company was â€śreviewing the decision and evaluating our options.â€ť

It is possible the company could use legal maneuvers to stall and delay, further denying Chattanooga workersâ€™ right to collective bargaining.

We ask that you communicate immediately with leadership in Wolfsburg, asking them to do the fair and just thing by beginning negotiations with Chattanooga workers:

Thanks to Kristyne Peter at UAW, Washington

August 2015: Members of UAW Local 42 ask Volkswagen to recognize the local union as the bargaining representative of skilled-trades employees at the Chattanooga plant. The company declines the request.

October 2015: UAW Local 42 files paperwork with the NLRB seeking a representation election for employees in the skilled-trades unit.

November 2015: The NLRB rules in favor of UAW Local 42 and orders an election for 160 skilled-trades employees at Volkswagenâ€™s Chattanooga plant, rejecting an attempt by the company to block the election.

December 2015: Skilled-trades employees at Volkswagenâ€™s plant in Chattanooga vote overwhelmingly to designate UAW Local 42 as their bargaining representative. The NLRB confirms that 71 percent of employees voting favored recognition for UAW Local 42. Volkswagen refuses to recognize UAW Local 42 or enter into collective bargaining, and asks the NLRB for a review of the election.

February 2016: UAW Local 42 files charges with the NLRB stipulating that Volkswagen is violating the National Labor Relations Act and has â€śunlawfully continued to refuse to bargain.â€ť

April 2016: The NLRB denies Volkswagenâ€™s request for a review of the December election, in effect, upholding the election and its results.