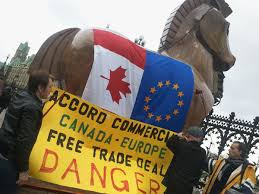 According to reports from the Office of Canadian Trade Minister Chrystia Freeland Canada and the European Union have still not nailed downthe investor-state court system (ISDS Clauses) in the recently signed CETA-EU trade deal.

The investment court, which would allow Canadian companies to sue EU governments government if they felt they had been treated unfairly – and vice-versa, were one of the issues Belgiumâ€™s Wallonia region initially voted down CETA.

Ms. Freeland rejected any re-negotiationÂ  of the CETA text during talks with the Walloons and the EU last week. The Belgians eventually agreed on a political document that mostly reaffirmed and clarified what was already in the deal, apart from a promise to ask the European Court of Justice to pass judgment on the constitutionality of the investment court.

Ms. Freelandâ€™s spokesperson, said the Canadian government is working with the EU on further refinement to the investment court system: â€śThe system in CETA was negotiated to allow it to be further developed. It is something we are continuing to build with our European partners,â€ť was the comment from Freeland’s office.

Ms. Freeland herself said that the investment court system had been â€śleft very openâ€ť when the CETA was finalised, after she was asked whether she thought the investment court would ever be brought into force by EU member states. â€śWe knew that we were doing some new and important things in dispute settlement, introducing really a new, progressive way of doing it. And we were very aware that Canada and Europe would need to work together to finalise the details of that, to finalise how that would look. And thatâ€™s a process that we are now very much beginning to be engaged with Europe on,â€ť she said.

The investment court system is one of the few areas of the CETA deal that will not come into force provisionally if the European Parliament approves the deal in a voteÂ  in December. That means it will be left to the national, and some regional, governments of each member state in the EU to decide whether they approve of the investment court, and other parts of the deal that wonâ€™t come into effect provisionally.