Capital, Thomas Piketty and the role of Modern Collective Bargaining 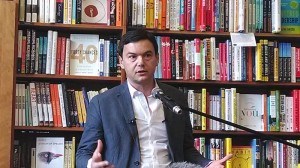 By the TUC’s Tim Page

I was privileged to be at the IPPR on Wednesday, to hear the French economist, Thomas Piketty, present on his book,¬Ý‚ÄòCapital in the Twenty First Century‚Äô. As IPPR Director Nick Pearce told the audience, this book has been critically reviewed in all major newspapers. It has captured the imagination of the Centre Left and given intellectual ballast to attempts to forge a post crash, post neo-liberal economic model.

The book is marvellous: it is ambitious in its sweep, yet highly readable for a discussion of such a complex subject. At 577 pages (excluding notes), the book is long and the analysis that follows is necessarily based on a partial reading. ‚ÄòCapital in the Twenty First Century‚Äô is being widely discussed and had I given it the time and attention it really deserves before putting pen to paper, I‚Äôd have missed the moment. I hope, nevertheless, to give a sense of the book and a few thoughts in response.

‚ÄòCapital in the Twenty First Century‚Äô builds on the work of Marx and Kuznets. Piketty poses the dilemma thus:¬Ý‚ÄúDo the dynamics of private capital accumulation inevitably lead to the concentration of wealth in ever fewer hands, as Karl Marx believed in the nineteenth century? Or do the balancing forces of growth, competition and technological progress lead in later stages of development to reduced inequality and greater harmony among the classes, as Simon Kuznets thought in the twentieth century?‚Äù

Addressing this question, ‚ÄòCapital in the Twenty First Century‚Äô provides a mass of evidence to show that modern capitalism, if left to its own devices, rewards ‚Äòcapital‚Äô at a higher rate than income. It follows that under modern capitalism, the wealth of the ‚Äòhaves‚Äô will always rise faster not only than the ‚Äòhave-nots‚Äô, but also the ‚Äòworking hard in order to haves‚Äô.

This highlights something akin to a structural flaw in capitalism: we have been told that with hard work, talent and a bit of luck, capitalism affords increased wealth via the law of the market. The cream should, as it were, rise to the top. Piketty‚Äôs analysis undermines this proposition.

Thomas Piketty also shows that the years following the Second World War (the ‚ÄúTrente Glorieuses‚Äù in the author‚Äôs native French), during which inequality fell, were a historical aberration, brought about by policy responses to war and the shocks of war.

These years found expression in the UK in both Harold MacMillan‚Äôs famous phrase to the working class, ‚ÄúYou‚Äôve never had it so good‚Äù, and in the Labour revisionist politician Anthony Crosland‚Äôs book, ‚ÄòThe Future of Socialism‚Äô. Yet in the 1980s and 1990s, as Piketty shows, this trend reversed; or, if Piketty is right, capitalism reverted to type.

How big a problem is this? Piketty argues that we have avoided the ‚ÄúMarxist apocalypse‚Äù, but we have not modified structures of capital an inequality sufficiently, adding:¬Ý‚ÄúWhen the rate of return on capital exceeds the rate of growth of output and income, as it did in the nineteenth century and seems quite likely to do again in the twenty-first, capitalism automatically generates arbitrary and unsustainable inequalities that radically undermine the meritocratic values on which democratic societies are based.‚Äù

This is a book of its time. I suspect that, had it been written 15 years ago, it would have gained much less attention. The reason is that 15 years ago, politicians, including those of the Centre Left, were not particularly preoccupied either with wealth or with equality.

They were concerned about poverty. There‚Äôs nothing wrong with that, of course, but the zeitgeist of the New Labour years, as the UK‚Äôs Centre Left sought to move beyond Thatcherism, was that so long as the poor got richer and moved out of poverty, inequality didn‚Äôt matter.

Arguments that more equal societies are happier societies were decidedly old hat. But the intellectual wind has changed direction and the Centre Left is, once again, concerned at the absolute gap between rich and poor, partly as fairness once again becomes part of the debate.

Picketty‚Äôs main policy response is that there should be a global tax on capital, a suggestion that he admits is utopian. This tax has to be global, in order to prevent the rich simply moving abroad to avoid it. Picketty accepts that, in the current climate, a capital tax is politically unacceptable, but as he told the IPPR event, fashions change.

He is right about that. In the 1940s, Keynes was all the rage. In the 1970s, Friedman and Hayek became the star economists. To some of us, it feels as if neo-liberalism has gone on forever, but it is less than 40 years old, having so far lived a little (but not much) longer than the Keynesian consensus. There‚Äôs no reason to believe that a new hegemonic model will not emerge, whether or not this addresses higher taxation for the richest.

Piketty is correct when describes taxation as ‚Äúpre-eminently a political and philosophical issue‚Äù, yet my one concern about ‚ÄòCapital in the Twenty First Century‚Äô is that it puts all the onus on the state to regulate capitalism.

The state does, of course, have the primary role and perhaps it is too much to expect Piketty to explore other possibilities, yet I wonder if there is a role for other actors. I am thinking, perhaps inevitably, of trade unions, whose role does not feature in Piketty‚Äôs analysis.

Piketty discusses the growth of so-called ‚Äòsuper managers‚Äô, who we might know better as top company executives. Such ‚Äòsuper managers‚Äô did not seek excessive pay in the years of high marginal taxation for the richest, because it would have simply been clawed back in tax.

But post Thatcher and Reagan, the salaries of those at the very top have reached astronomical levels. This is partly due to remuneration committees being chosen, as Piketty says ‚Äúin a rather incestuous manner‚Äù. The TUC favours a role for ordinary workers on remuneration committees, acting as a break on executive excess.

None of this is to deny Piketty‚Äôs important observations about the role of taxation in restricting inequality, but perhaps we should have a wider view of how to bring this about.