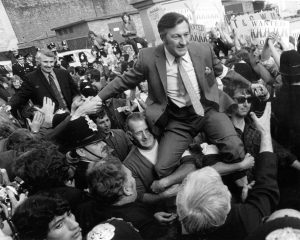 Vic Turner, dockers leader and one of the founders and President of the Liaison Committee For The Defence Of Trade Unions

Recently in the Morning Star FBU General Secretary Matt Wrack responded to an earlier piece in the paper penned by myself in which I was critical of the newly launched ‚ÄòFree Our Unions‚Äô campaign suggesting that it was little more than a front for the Alliance for Workers‚Äô Liberty.

Matt made some very important points in his article and of course it makes no sense to engage in a war of words with comrades representing unions with a long and proud history of standing up for trade union freedom; in Matt‚Äôs case the FBU and I would also include the RMT in this group.

As the Secretary of the Campaign for Trade Union Freedom, I‚Äôm pleased to say that FBU and RMT have been and remain active affiliates of the Campaign.

I want to broadly set out the position of the Campaign for Trade Union Freedom.

The Campaign is a linear descendent of the Liaison Committee For The Defence of Trade Unions which as is well known had an exemplary record in opposing the anti-union White Paper In Place of Strifeand what came later, the Industrial Relations Act 1971.

The LCDTU was of course the driving force behind the campaign to free the Pentonville 5.

The Labour Government of the 1970s went a long way in righting the wrongs of the Heath years but by 1980 and the first of Thatcher‚Äôs new wave of anti-union laws any idea of further advance was brought to a shuddering halt. The TUC was of course correct to call a one day stoppage in protest about this first move against us, in our naivety we had no real idea about the neo-liberal assault that was about to be unleashed. This was not Heath mark II but a step change in the attack on the working class and its unions.

The very limited Blair reforms received short shrift from many unions and campaigning groups, including the Liaison Committee and others such as the United Campaign for the Repeal of the Anti-Union Laws and Press for Union Rights. Peter Mandelson and Tony Blair made it very clear that what was in their 1999 Act was it, take it or leave it, and they meant it.

To recap, these so-called reforms were:

In other words, nothing on trade union rights or undoing the wrongs of the Thatcher era, the Blair years were wasted years.

My sketch of the past 50 years is drawing to a close with the advent of the Tory lead Coalition in 2010 and the subsequent Conservative government since 2015. The Coalition with Vince Cable as Secretary of State introduced a series of mainly anti-worker with some anti-union measures, which became known as the Beecroft proposals, all of which was documented and opposed by the now merged Campaign for Trade Union Freedom.

The Trade Union Act 2016 introduced by the Tories led with two specific lines of attack; firstly, the introduction of thresholds in industrial action ballots was intended to make it even more difficult for unions to organise lawful industrial action; and, secondly, the attack on unions‚Äô political funds was clearly aimed at breaking the unions‚Äô link with Labour and effectively bankrupting the Labour Party. 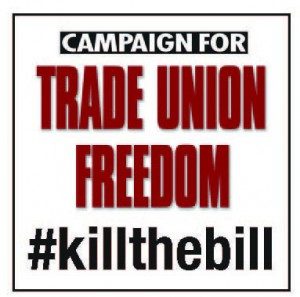 The Campaign sought to mobilise opposition to this new law at the Bill stage, reprising a slogan from forty-five years previously ‚ÄúKill The Bill.‚Äù

Then as now, I believe that the essence of any campaign for free trade unions must support and promote two key aims:

The Corbyn insurgency within the Labour Party represents the first opportunity we have had to break the neo-liberal grip on trade union rights that has existed since 1980 and to make some progress on our key aims. 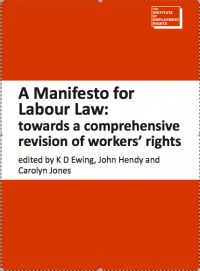 In my original Morning Star article I wrote:

We know the Shadow Cabinet team is being advised by some of the trade union movement‚Äôs closest legal advisers, so we are prepared to wait and see how extensive a right to strike is within the new legislative framework after the next General Election. 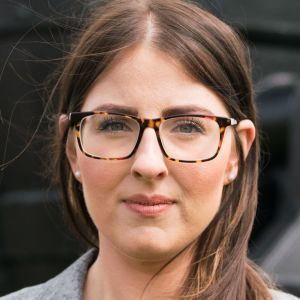 Although it remains an important point of principle we do need to ask how useful a call for a blanket repeal would be in practice.

Take for example my own position. As a consequence of the 1984 Act, I have been directly elected on to the Unite EC to represent the Docks & Railways Sector by Unite dockers and railway workers across Britain and Ireland.

No one would seriously suggest taking from our members the opportunity to vote for all of their executive members.

Rather, our call should be – and is¬Ý – for unions to be free to control their own Rule Books, a right enshrined in ILO¬ÝConvention 87 and reflected in Labour‚Äôs 2017 Manifesto.

There is however no incongruity for the Campaign in supporting the advice being given by the Institute of Employment Rights to the Labour Front Bench that will break the 40 year grip of neo-liberalism. The labour rights offer in For the Many, Not The Fewwill provide for an extensive and positive new legal framework for unions, their members and workers generally.

Whatever is in the package does not mean that the Campaign is demobilised; it may well be that further work will be necessary on the right to strike and reclaiming our rule books.

Andy Green is National Secretary of the Campaign for Trade Union Freedom. He is also Unite convenor at Tilbury Docks; a member of the Unite Executive Council, Docks & Rails Sector; and, a rank and file activist in the International Dockers‚Äô Council.