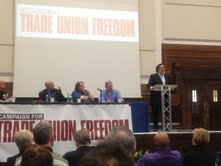 ‚ÄúCollective bargaining will save this country‚Äù declared John Hendy QC at the launch rally for the Campaign for Trade Union Freedom. ‚ÄúBy putting money into the hands of workers and not those already on ¬£100,000 or more, or into profits of firms who do not invest it in the economy, we will defeat austerity‚Äù he said to passionate applause.¬Ý

In fact, if you could have bottled the enthusiasm, energy and commitment in the Friends Meeting House, injected it into the 6.5 million trade unionists in this country, we would not be discussing anti trade union laws and a decline in collective bargaining since 1979 from 82% to 23%, today. The freedoms we don‚Äôt enjoy, but are there for most workers across Europe ‚Äúneed urgently re-instating in the UK for the sake of everyone of us‚Äù said John.

This was the overwhelming and clear message from the successful launch of a new united campaign for UK trade union freedoms and rights.

¬∑ Every worker has the right to be covered by collective bargaining

¬∑ We need a law that provides retrospective justice for all the abuses of power and injustice given out to the Shrewsbury 24, Cammell Laird workers and NUM members to name but a few.

Ricky Tomlinson got a standing ovation after an entertaining and yet emotional speech, describing the political trial he went through for the Shrewsbury picket and exactly what is now coming out about the great miscarriage of justice this was.¬ÝAn e-petition calling for a debate on this needs your urgent signature.

Bob Crow made an impassioned plea for the fact that ‚ÄúThe only people who should decide the destiny of their own union are the members‚Äù. By reminding everyone how Mandela and his comrades overcame unbelievable obstacles to defeat Apartheid he said ‚Äúwe can then surely defeat these rotten anti trade union laws‚Äù

Carolyn Jones from the IER praised the Morning Star as the¬Ýonly daily newspaper that will report the trade union movement and support this campaign.

Roger McKenzie speaking on behalf of UNISON personally identified with the experiences of discrimination and abuse that happens to so many workers today and appealed to everyone to stand up collectively and organise for a strong trade union movement.

Sarah Veale from the TUC supported the Government‚Äôs de-regulation of red tape if it applied to the lengths trade unions are forced to go through to be within the law. Also decrying the obscenity that workers now have to pay to obtain justice at industrial tribunals, she gave the full backing of the TUC to the united campaign.

Len McCluskey from Unite gave his union‚Äôs total support for the campaign. In a powerful and thoughtful speech he reminded everyone that we could all be asked by generations to come. ‚ÄúWhat did you do when they were taking away our heritage.‚Äù¬ÝEchoing his recent comments in the Morning Star¬Ýhe asked ‚ÄúWhy do they attack us so much if we are irrelevant?‚Äù

Overall, especially given the weather, this was an impressive and enjoyable launch of a united campaign that is long overdue. The key now, as all the speakers said, is to get this out to all union branches, regions, Trade Councils and individual members at every opportunity.