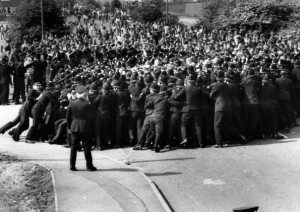 The Battle Of Orgreave During The Miners Strike

Cabinet papers published under the 30-year rule today show in details how Margaret Thatcherâ€™s set out to crush trade unions in the 1980s. Cabinet papers reveal that she told the head of her policy unit to ‘neglect no opportunity to erode trade union membership.

Â â€śWe must see to it our new legal structure discourages trade union membership of the new industries,â€ť wrote Ferdinand Mount, then head of her policy unit.

A detailed news item published inÂ The Guardian Â reportsÂ that the papers show Mountâ€™sÂ demand to ensure that trade union members had to opt in, rather than opt out of the political levy â€“ was regarded as a step too far even by Thatcher, who worried it would open up the discussion on companies funding the Tories.

The papers show Thatcherâ€™s manufacturing of the Miners strike and show how the Tories planned to withstand a coal strike in 1983, a year before pit closures sparked the strike in March 1984.