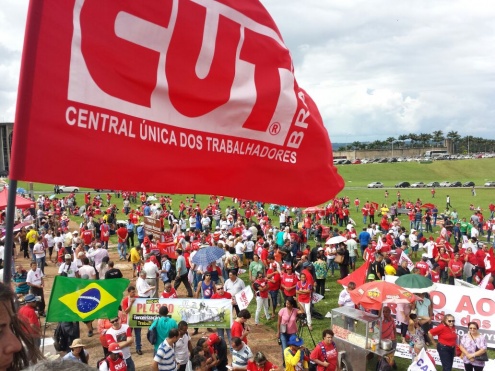 Trade unions in Brazil and their social movement partners are calling for a general strike on 15th April, after the House of Representatives voted on Wednesday to adopt a bill favouring the liberalization of outsourcing.

The PL 4330 bill sets¬Ýno limits¬Ýto outsourcing in private and public sectors. Activities, including those linked to the core business of a company, could be outsourced.

If made law, it could lead to a large-scale replacement of direct permanent workers by outsourced workers with poorer working conditions, less protection and fewer benefits.

Fernando Lopes, IndustriALL Assistant General Secretary, said: The adoption of the PL 4330 Bill marks a step backwards for workers‚Äô rights. Outsourcing represents a real obstacle to freedom of association. IndustriALL supports its affiliates which will mobilize on 15 April to withdraw this bill.

The day before the crucial vote, several IndustriALL Global Union affiliates and their trade union confederations¬Ýdemonstrated¬Ýin the capital Brasilia in front of the House of the Representatives to try to prevent the PL 4330 bill from being adopted.

They intended to lobby parliament members to postpone the vote and further debate the issue of outsourcing. However, trade unions were denied access to the House of Representatives and that afternoon there were clashes between protestors and the police. Two unionists were detained and three were hurt.

Despite this opposition, the House of Representatives decided not to delay the vote and approved the ‚Äúemergency regime‚Äù to vote rapidly on the bill in plenary session. The bill was approved the next day with 324 votes in favour and 137 against. The government had also tried to postpone the vote without success.

On 14th April, political parties will present modifications on the most controversial points of the bill. Once these modifications will have been discussed and approved, the bill will be submitted to the Senate.