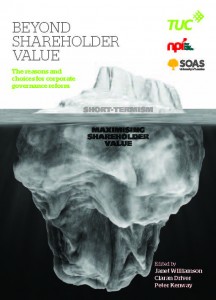 The TUC has set out a four point campaign â€“ ‘Respect At Work’ â€“ on employment rights that it hopes will inform the debate in the run up to next yearâ€™s General Election.

The four elements are:

â€˘ stemming the tide of casualisation – including ending the abuse of zero hour contracts and, equal pay for agency workers

â€˘ a new framework of employment rights – including reversal of the coalition attack on statutory redundancy and TUPE and, unfair dismissal protection from day one

It is in connection with the fourth point that Beyond Shareholder Value: The Reasons and Choices For Corporate Governance Reform has been launched by the TUC, a collection of essays on reforming corporate governance that includes some discussion about the possibility of worker directors in the UK.

There is now no question that reform of the way our large corporations are managed is clearly overdue. A recent study by the High Pay Centre found that directorsâ€™ pay was now running at almost 180 times that of the lowest paid workers. In the discussion in this book the point is made that thirty or so years ago directorsâ€™ pay may have seemed reasonable in relation to other wage earners but has grown exponentially under neo-liberalism, prompting some to argue that if they could have got way with before they probably would have done – but there were social brakes, there are no such brakes now.

At the public launch of the book, Labourâ€™s Shadow Business Minster, Iain Wright MP, was moved to promise a worker representative on company remuneration committees and even Tory Jesse Norman MP spoke about crony capitalism â€“ the broken link between corporate reward and company performance!

Readers will soon discover that the debate on reform of corporate governance may be divided into two schools of thought â€“ reform to improve economic performance and reform to provide worker voice â€“ although of course there is some cross over between the two positions. In the former camp, some reformists argue against the corporate greed discussed above.

Others are more concerned about, the central thesis of the booklet, moving away from a duty to solely promote shareholder value and open up duties to other stakeholders.

An exclusive focus on shareholder value is said to promote short termism in that directors in the UK work to the publication of quarterly reports and eschew long term measures that may not synchronise with a quarterly reporting structure. Corporate bonuses are structured to short term results.

Further, how does the advent of high frequency share trading in the Anglo-American world fit in with the long term? Colin Crouchâ€™s essay also raises the dubious practice of private equity investment delisting Stock Exchange listed companies often to strip out the assets before returning to the significantly poorer corporation to the market.

The cross over for advocates of improved economic performance and worker voice is found with those who argue that an involved workforce with access to the highest levels of decision making bring to the table knowledge and information otherwise unavailable to management.

Worker voice is the key to open improved performance.

Itâ€™s clear from this list that although worker directors do not guarantee improved economic performance, those countries that are economic high flyers are also the ones that have a system of industrial democracy that includes worker directors. Michael Goldâ€™s essay is a very interesting piece of work. He argues that our system corporate governance denies to workers the fourth element that makes a democratic whole.

In the UK what is missing is citizenship at work that meaningful participation rights, including worker directors, would go some way in meeting. At the level of mobilising workers to support the demand for a voice we should leave the argument linking worker directors with improved economic performance slightly to one side, important though it is, see Frances Oâ€™Gradyâ€™s essay on promoting a high investment, high skill and high productivity economy.

We should shift the argument to a rights issue, workersâ€™ rights to seats on the board to act as a counter veiling power to the obsession with short termism and board room excess.

These issues have contributed to the crisis, a crisis under which working people are bearing the brunt with overbearing austerity measures and attacks on their limited rights at work.

Click here on on the graphic to download a copy of “Beyond Shareholder Value: The Reasons and Choices For Corporate Governance Reform” is by J Williamson, C Driver & P Kenway (eds)