Bernie Sanders‚Äô Plan Could Put A Union In Every Workplace 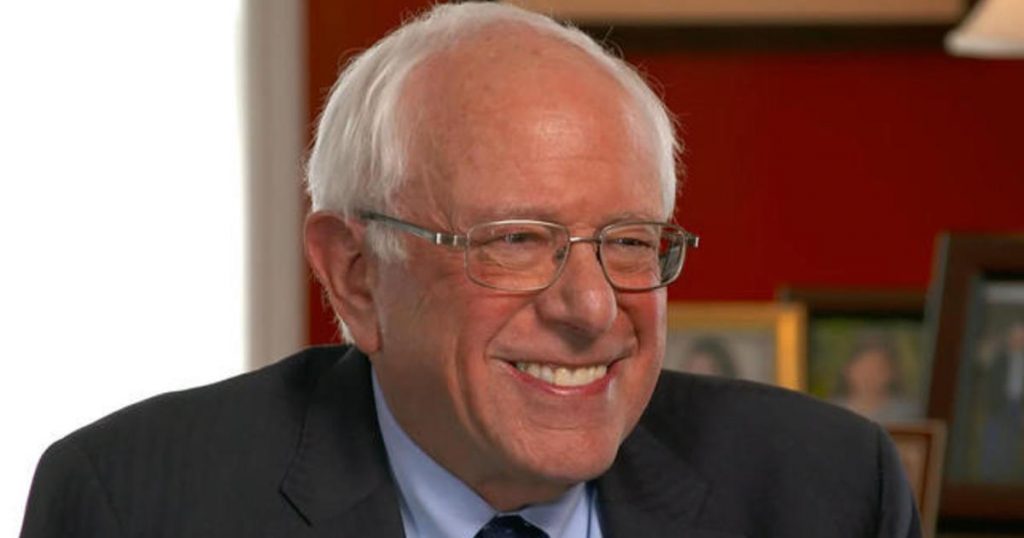 By Shaun ¬†Richman ‘In The Times’

US democratic Presidential¬†Candidate¬†Bernie Sanders released his¬†Workplace Democracy Plan¬†on Wednesday. His campaign‚Äôs labor platform makes the strongest case of¬†any of the candidates so far¬†that he would be unions‚Äô best ally in the White House in generations.

At a time when the Democrats‚Äô official labor law reform proposal,¬†the Protecting the Right to Organize (PRO) Act, would essentially overturn the¬†anti-union Taft-Hartley Act, the¬†race to the left¬†for labor‚Äôs support in the primaries demands bolder policies. Bernie Sanders does not disappoint.

Where Sanders‚Äô labor platform is most exciting is its proposal for new workers‚Äô rights and forms of union representation that transcend the National Labor Relations Board framework of enterprise-based contract bargaining.

One is a ‚Äújust cause‚ÄĚ legal standard of employment, which would mean that non-managerial workers‚ÄĒwhether they are represented by a union or not‚ÄĒcould only be fired only for a legitimate, serious, work-performance reason.¬†This¬†has been a¬†cause¬†that¬†In These Times¬†has long championed, and as¬†Moshe Marvit and I explained elsewhere, ‚Äúwould open up new pathways to organizing.‚ÄĚ Bernie Sanders is the third candidate (so far) to embrace the reform, after Bill de Blasio and Jay Inslee, but he‚Äôs the first leading contender for the nomination to do so.

But the best proposal in Sanders‚Äô platform is what he refers to as ‚Äúsectoral collective bargaining‚ÄĚ but others in the academic and think tank world have been calling ‚Äúwage boards.‚ÄĚ Basically, he proposes to work with trade unions to construct new industrial standards boards‚ÄĒwith representatives for the employers, workers and possibly that nebulous concept, ‚Äúthe public‚ÄĚ‚ÄĒthat can set minimum standards for wages, benefits and hours across entire sectors of the economy thereby taking those issues out of competition. This is¬†essentially the framework of the First New Deal legislation, which the¬†Lochner-era Courtoverturned, and which the National Labor Relations Act was initially meant to operate¬†alongside¬†of.

Sanders‚Äô wage board proposal was clearly influenced by the Center for American Progress‚Äô¬†David Madland‚Äôs and University of Michigan‚Äôs¬†Kate Andrias‚Äô¬†dogged research and advocacy for reviving the wage board model. It‚Äôs also not insignificant that a revived wage board is how Service Employees International Union (SEIU) local 32BJ¬†won a $15 minimum wage¬†for fast food workers in New York state, and that SEIU is rather bullish on expanding and exporting the model.

This is possibly the most important labor law reform that a Democratic president (with a Democratic Senate willing to nuke the filibuster) could achieve. It‚Äôs that one that could put a union in every workplace in America on day one. Because if unions had the legal reach to improve wages and working conditions across an entire industry, workers¬†would¬†join and support the unions that were fighting for them‚ÄĒparticularly if we made it easy for them to make voluntary paycheck contributions‚ÄĒeven before they win a collective bargaining election at their specific workplace.

The man with the plan

Sanders also offers a laundry list of good and overdue reforms. His proposed amendments to the outdated and ineffective National Labor Relations Act‚ÄĒlike most of the candidates‚Äô plans‚ÄĒimprove upon the PRO Act in several ways. It adds card check recognition and the right to a first contract for new unions, which were provisions of the failed¬†Employee Free Choice Act¬†(EFCA) that did not get carried over into the current Democratic bill.

Sanders also proposes to fully restore workers‚Äô right to strike and to engage in solidarity activism. In the case of the latter, that means wiping out more provisions of the 1947 Taft-Hartley Act; in the former, it means overturning an obscure 1938 Supreme Court decision,¬†NLRB v. Mackay Radio & Telegraph Co.,¬†that allows employers to permanently replace workers who go on strike over economic demands. Employers increasingly took advantage of this decision during the Reagan administration.

Banning permanent replacements was the labor movement‚Äôs top legislative priority in the first year of Bill Clinton‚Äôs presidency. The¬†Cesar Chavez Workplace Fairness Act of 1993¬†was the EFCA of its era, and similarly died of a filibuster in the Senate. Now it is increasingly becoming a consensus position among Democratic candidates.

There are also some policies and procedures of the NLRB that Sanders would change. These may be done through legislative change, or Sanders may be considering executive orders and strict directions to his future Board appointees. One is to protect existing collective bargaining agreements when a unionized employer is merged into a new company. Current NLRB rules on successorship allow an employer to tear up the contract and then bargain a union to impasse over concessions.¬†Sanders used his campaign infrastructure to support workers¬†represented by the¬†United Electrical, Radio & Machine Workers of America¬†at a locomotive plant in Pennsylvania this past February.

Sanders also wants to ban ‚Äúmanagement‚Äôs most important weapon‚ÄĚ¬†in anti-union campaigns,¬†mandatory captive audience meetings. The courts have ruled that employers have a¬†First Amendment right¬†to express their anti-union views, and employers use the power of the paycheck to force employees to listen to them. Bernie Sanders says that workers should have the right to walk out on a presentation.

One very attention-grabbing plan responds directly to¬†Joe Biden‚Äôs bad-faith arguments¬†that a Medicare-for-All system would be unfair to unions who have historically traded higher wages for employer-sponsored health insurance. Sanders‚Äô NLRB would support unions reopening their collective bargaining agreements in order to recoup as much of an employers‚Äô cost savings from taxpayer-funded health care as possible as new wage gains. His platform implies that a unionized employer that does not share financial data and agree to sharing its cost savings would be charged with committing an unfair labor practice.

Finally, like many of the candidates in the crowded Democratic field, Sanders proposes to fix an original sin of the NLRA‚ÄĒits racist exclusion of domestic and farm workers from the protections of the Act.

Sanders also prioritizes legislation that would accelerate and codify badly needed regulatory reforms that got bogged down by right-wing judicial activism and corporate opposition during Obama‚Äôs second term. These include the Browning-Ferris joint-employer standard, which curtail corporations‚Äô ability to hide behind franchise relationships to avoid bargaining over working conditions that they dictate in reality. He also calls for an expanded ‚Äúpersuader rule,‚ÄĚ which would force employers to disclose the names of their hired gun union-busters and¬†give union organizers equal access to workers¬†during an organizing campaign. A proposal to end the practice of misclassifying workers as ‚Äúsupervisors‚ÄĚ and ‚Äúindependent contractors‚ÄĚ in order to avoid paying benefits and overtime is lacking somewhat in detail, but let‚Äôs just assume that Bernie co-signs¬†whatever Elizabeth Warren proposes.

In the public sector, Sanders‚Äô platform also calls for expanding the union rights of federal workers‚ÄĒincluding the right to strike and to bargain over wages. Ronald Reagan‚Äôs infamous termination of striking air traffic controllers in 1981 was a signal event in corporate America‚Äôs assault on unions. Ironically, that strike was sparked by the federal government‚Äôs refusal to bargain over wages. The right to bargain and strike‚ÄĒlong denied to federal labor unions‚ÄĒwould likely make strikes over routine collective bargaining matters less likely. But they would, as Sanders was quick to point out, empower federal workers to use their labor power to put an end to routine government shutdowns.

He also pledges to sign the¬†Public Service Freedom to Negotiate Act, which was introduced by Representative Matt Cartwright (D-Pa.) and Senator Maize Hirono (D‚ÄďHawaii) in June and which would extend union rights to all state and local government employees as well.

The turf of U.S. politics shifts beneath our feet like quicksand. This is a moment of great possibilities and existential threats. One of our biggest challenges as a labor movement is that too many of us‚ÄĒleaders, rank-and-filers and leftist critics alike‚ÄĒview things as static, as stuck in a moment in time, whether that be¬†2009, 1993 or 1978; That real change won‚Äôt happen without a crisis.

But we are already in a crisis.

The crisis right now is the threat of fascism, domestic terrorism and ethnic nationalism. These are all problems that have been made possible by the systemic corporate attack on union rights and a yawning gulf of economic inequality. Centrist politicians and shapers of public opinion who have hardly been friends to the working class are slowly waking up to the role that unions play in political education and voter turnout.

So even if Bernie doesn‚Äôt win the nomination‚ÄĒif it‚Äôs Elizabeth Warren or Kirsten Gillibrand or even Kamala Harris‚ÄĒwe still probably have a candidate and a growing portion of the Democratic establishment who recognize that they have to deliver real wins for working families if they don‚Äôt want to get turned out of office all over again in 2022 by a racist and demagogic death cult.

As a labor movement, now is the time to demand more. Much more. Let‚Äôs take the issue of ‚Äújust cause,‚ÄĚ which is a basic human right enjoyed in much of the world and the lack of it is one of the foundational problems that keeps most workers from pushing back on employers‚Äô unreasonable commands.

Elizabeth Warren hasn‚Äôt even put out her full labor platform yet. I fully expect it to be full of robust proposals to restore the legal rights and power of workers with some delightfully wonky detail. If she joins Sanders in endorsing just cause, the issue‚ÄĒwhich wasn‚Äôt on any union‚Äôs agenda‚ÄĒcould be on the fast track to the Democratic party‚Äôs 2020 platform (as long as the candidate isn‚Äôt someone who promises that ‚Äúnothing would fundamentally change‚ÄĚ).

Good ideas that are put on¬†any¬†primary candidate‚Äôs agenda should remain on¬†labor‚Äôs¬†agenda in the years to come. When it comes to ideas for restoring the legal powers of workers, our approach should be ‚Äúyes, and!‚ÄĚ SEIU President Mary Kay Henry has the right approach for these times. The union released its¬†own list of labor law demands¬†on the same day as Sanders, and challenged every candidate to release a detailed labor plan ‚Äúexplaining how they will make it possible for all working people to join unions.‚ÄĚ The political moment, says Henry, ‚Äúis no time for minor tweaks to our broken system.‚ÄĚ

Let the primary of ideas continue!

John¬†Hendy QC says: “The best proposal in Bernie¬†Sanders‚Äô platform is what he refers to as ‚Äúsectoral collective bargaining‚ÄĚ while others in the academic and think tank world have been calling ‚Äúwage boards.‚ÄĚ .

Shaun Richman is an¬†In These Times¬†contributing writer and the Program Director of the Harry Van Arsdale Jr. Center for Labor Studies at SUNY Empire State College. His Twitter handle is @Ess_Dog.

“Working In These Times”¬†is dedicated to providing independent and incisive coverage of the labor movement and the struggles of workers to obtain safe, healthy and just workplaces.