Hot on the heels of the proposed merger in Australia of the Construction and Energy Workers union with the Maritime Union and the Textile Workers union which employers, the Australian Government and the right wing media are attempting to stop – via legislation ŌĆō (which includes a test to see if union mergers are ŌĆśin the public interestŌĆÖ) the Nationa┬Łl Union Of Workers and United Voice are speeding up their merger plans to create a 170,000 strong union. 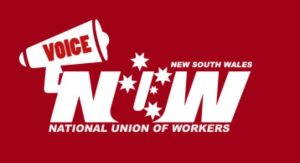 Aussie PM Malcolm Turnbull has vowed to take action to try to stop the merger of the Construction Forestry Mining and Energy Union and the Maritime Union of Australia into a 120,000 member union, (see our previous story on this here) but now the NUW and United Voice have upped the stakes by speeding up talks to create a ŌĆ£powerful organising and campaigning forceŌĆØ.

The Turnbull government, employers and right wing media are running scared the prospect of union mergers, given the potential to unify unions to speak for workers with one voice, have a powerful voice in the Australian Labor Party and to confront the countries anti-union laws.

The NUW has more than 70,000 members working across warehousing, distribution, food, dairy, cold storage and other food-related and production industries.

NUW members attending a meeting in Melbourne were recently advised that merger plans were ‘progressing quickly’.

United VoiceŌĆÖs Victoria branch members received emails confirming the merger talks were picking up speed, describing a ŌĆ£commitmentŌĆØ between the two unions to proceed with amalgamation.

Victoria branch secretary Jess Walsh said : ŌĆ£The talks have been excitin┬Łg and the two unions will have more over the coming months.ŌĆÖŌĆÖ

Along with Turnbull, some media commentators in Australia have gone into overdrive on the prospect of union mergers, (and other unions such as those in transport joining the talks) – describing unions as ‘lawless’ and the mergers themseleves being designed by union officials to damage the Australian economy and supply chain.