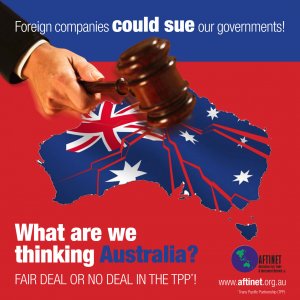 Although not passed through the Australian Senate yet, the Korean – Australian Free Trade Agreement known as KAFTA, is poised to be green lighted and this is real cause for concern. says the Australian Manufacturing Workers Union (AMWU).

AMWU National Secretary Paul Bastian came out swinging at both the Coalition Government and the Australian Labour Party who have also jumped on board, stating that KAFTA wasÂ “an appalling agreement that strips away local jobs and Australiaâ€™s sovereign rights”. Bastain added â€śwe are deeply disturbed that both sides of politics are supporting this dangerous agreement”.

It also comes at a time when the country is experiencing jobs stress and a 12 year unemployment high. AMWU says the free trade deal will make it easier for companies to bring in workers rather than have to hire local workers first.

KAFTA also leaves the door open toÂ imports from parts of North Korea that are not subject to labour standards and which are notorious for forced and prison labour.

AMWU says legally speaking it is not only bad for industry and jobs, it also includes an Investor State Dispute Settlement (ISDS) clause that allows private companies to sue theÂ Government and override Australian laws if a policy decision impactsÂ its business.Â Â