Ascent Of Giants – Report On NAFTA and Corporate Power 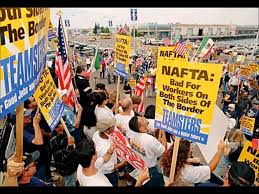 The report â€śAscent of Giantsâ€ť on NAFTAâ€™s impact on corporate power is based on data from Canadian firms and discusses how trade and investment liberalisation enabled corporations to concentrate market power through mergers and acquisitions. Investing in buying other companies diverted resources from productive investment which dragged job growth. Stockpiling cash also increased.

The timing of the study is important given the US current governmentâ€™s intensive policy of negotiating ever-more intrusive NAFTA-like trade and investment agreements with countries like Japan, the European Union, China and others.

Here are some excerpts:

Â Ascent of Giants: NAFTA, Corporate Power and the Growing Income Gap is by Jordan Brennan

The report can be downloaded here.

Our thanks go to Gail Cartmail of Unite.