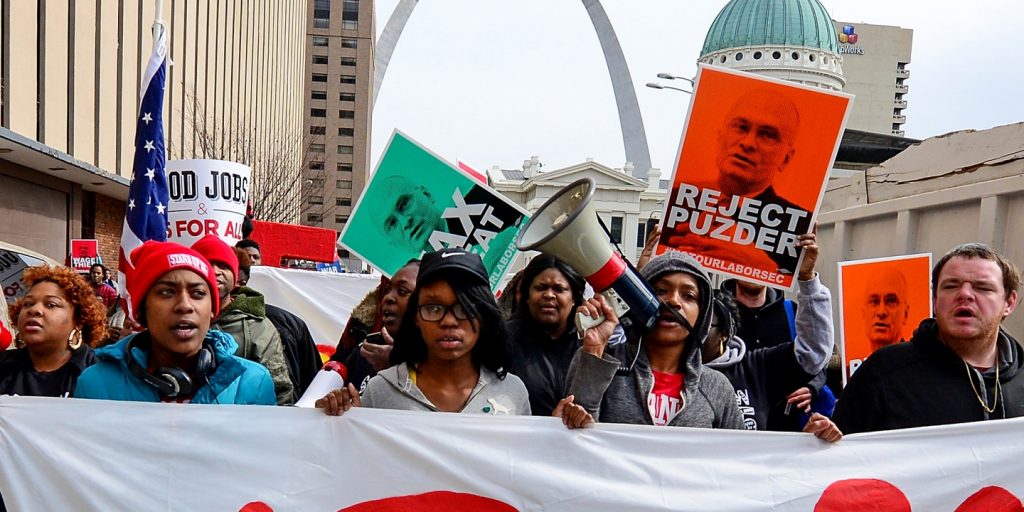 Many trade unionists in the USA have a ŌĆśspring in their stepŌĆÖ today (Wednesday 16th February) after learning that Donald TrumpŌĆÖs nominee for US Labour Secretary Andrew Pudzer withdrew his nomination when he recognised the uphill climb he was facing on Capitol Hill.

Pudzer the CEO of fast food chain giant CKE Restaurants, (owners of CarlŌĆÖs Jr and HardeeŌĆÖs outlets) was due to appear before the Senate health, education, labour and pensions committee Thursday

PudzerŌĆÖs nomination was facing opposition from unions, progressive groups, democrats and even some republicans.

The US Department of Labor website states that its mission is to ŌĆ£foster, promote, and develop the welfare of the wage earners, job seekers, and retirees of the United States; improve working conditions; advance opportunities for profitable employment; and assure work-related benefits and rights.ŌĆØ

PuzderŌĆÖs pedigree showed that he was likely to fall foul of the statement – as he has done the exact opposite of what the mission statement requires.

He has fought against workersŌĆÖ rights; argued against increases in minimum wages; argued for replacing workers with robots and ŌĆ£and showed┬Ādisdain for his own employees – ┬Ā the very people who helped make him a multi millionaireŌĆØ according to Sarah Baker who led the vetting team in the White House during ObamaŌĆÖs presidency.

It transpires that Puzder employed an ŌĆśundocumented immigrantŌĆÖ and never paid taxes ŌĆō and he would have been responsible for wage and working hours standards, benefits┬Āand providing protection for workers.

In 1990, PuzderŌĆÖs ex-wife went on┬Āthe Oprah TV show (in diguise) and alledged that Pudzer abused her ŌĆō a claim she has since withdrawn.

Richard Tumka the President of the US union umbrella organization the AFL-CIO says ŌĆ£the power of collective actionŌĆØ brought Pudzer down.

Unions and progressive groups have organized demonstrations against Pudzer since his nomination was announced, with a remarkable degree of success.

The Service Employees International Union (SEIU), staged protests around the country, the largest outside of CKEŌĆÖs St. Louis headquarters.

Mindful of the blue collar support for Trump among their own members unions made Puzder the focus of a campaign to portray Trump as a tool for corporate interests who favours low wages and exploitation.

Thomas Perez, the former US secretary of labour who is in the running to lead the Democratic National Committee, called Pudzer a ŌĆ£frequent flyer defendant – someone for whom we had a steady diet of wage and hour casesŌĆØ.

This decision was good news but as a US friend and a senior union official told me: ŌĆ£Who knows who Trump will bring forward next? The CEO of Burger King?ŌĆØ