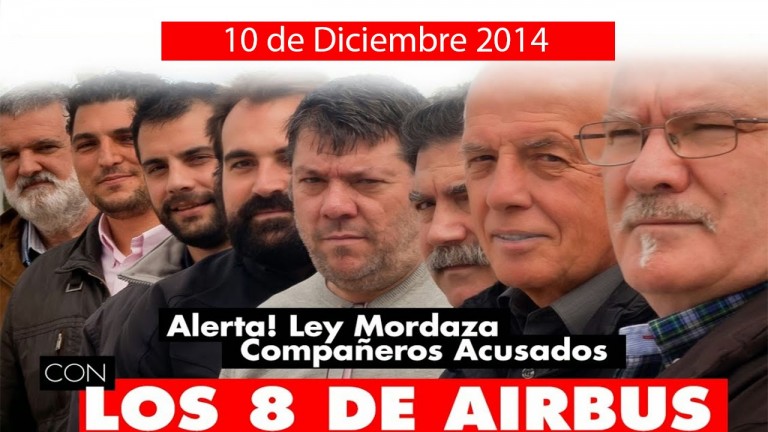 Resumption of the Activities of the International Commission for the Defence of Workers Prosecuted for Going on Strike and the Repeal of Article 315.3 of the Penal Code.

Meeting report of the Commission, 7th October, at the Lawyersâ€™ Centre of Atocha, Madrid

Last 7th October, this Commission met at the prestigious Lawyersâ€™ Centre of Atocha, Madrid, in the presence of GĂ©rard Bauvert, secretary of the International Committee Against Repression (CICR). Fifteen comrades, among whom were unionists prosecuted for going on strike and lawyers of Workersâ€™ Commissions (CCOO) and the UGT, met to inform themselves and act jointly in favour of union freedoms in our country and in defence of the hundreds of workers prosecuted for going on strike. Other comrades, who had actively participated in meetings organised by this commission and had shown interest in knowing the decisions it adopts and continuing its activity, were unable to attend.

The fundamental motivation of this commission is to obtain the repeal of article 315.3 of the Penal Code and to thus obtain the annulation of all the legal proceedings against the hundreds of workers and unionists prosecuted for going on strike. Consequently, we would like to contribute to creating the indispensable unity of political and union organisations who uphold the interests of workers so that they organise the mobilisation and necessary actions permitting the repeal article 315.3. Obviously, there is now a majority in the Congress of Deputies which can and must make it a reality.

The workersâ€™ movement has known an important initial victory in the mobilisation initiated by the CCOO and the UGT concerning the judgement of the Airbus 8, who were finally acquitted at their trial. However, the emergency remains, a large part of the proceedings go forward and there are several cases where the accusations have been upheld by the public prosecutor, with the demands for imprisonment, which find themselves awaiting hearing. For example, the condemnation to hard prison of six workers and unionists were upheld, which find themselves waiting for a pardon. In other cases, there also acquittals and dismissals but also severe condemnations in the form of financial sanctions.

The contribution of this commission has been to bring the international solidarity of organisations and militants from 18 countries, who addressed themselves to Spanish embassies and our government, to demand that the proceedings for going on strike be annulled and that article 315.3 be repealed. This contribution, made possible thanks to the Cicr, has been made available to our union confederations, the UGT ant the CCOO and to the campaign â€śA Strike is not a Crimeâ€ť, and expressed itself in two demonstrations which we organised in Madrid 20th November and 5th February, as well as in other demonstrations which took place in Barcelona, Seville and Valencia.

Two days before this meeting, 5th October, a large gathering organised by the CCOO took place in front of the MĂłstoles tribunal, where proceedings were scheduled against Juan Carlos Asenjo, president of the Coca-Cola Factory Committee in Fuenlabrada (Madrid). This hearing didnâ€™t take place and was postponed because several agents supporting the act of accusation against Juan Carlos were not present. Asenjo is prosecuted for having participated in a picket in his factory during the general strike against the reform of the Labour Code by Partido Popular (PP, Rajoy) in 2012 and is faced with three years of prison. GĂ©rard Bauvert of the CICR participated in the Coca-Cola gathering and was able to show his support for Asenjo and the other leaders of the CCOO.

The same day as the Asenjo judgement, a new non-legislative motion which considers that 315.3 must be repealed was approved in the Employment Commission of the Congress of Deputies at the initiative of the Republican Left of Catalonia (ERC, Esquerra Republicana de Catalunya), which is the object of a deal with the PSOE and which was supported by the Unidos Podemos, PNV (Basque Nationalist Party) and other groups against the votes of the PP. However, it is now time, with a new government, that a bill eliminating point 3 of article 315 of the Penal Code must be approved to thus end the legal proceedings.

At this very moment, we have new proceedings against workers and unionists for having taken part in strike actions. 4th November, that of Ricardo Vercher, member of the Enterprise Committee of the Barcelona Metro for the CCOO, faced with 5 years and a day of prison for the events which happened during the general strike against the reform of the Labour Code in 2012. In this very case, the principal infraction is stipulated in point 3 of article 315.

In the meeting, a communication indicated that CCOO unionists of the Madrid Metro were preparing demonstrations of solidarity with their prosecuted comrades at the Barcelona Metro (concretely, a resolution of the workersâ€™ council of the metro and a delegation from Madrid who showed up at the trial); they are currently elaborating a contribution concerning the minimum service decree of 1977 and the implied limits imposed on the exercise of the right to strike.

At the end of November, Pedro Galeano, worker for the municipality of Coslada in Madrid, is also ordered to appear. At first, the public prosecutor asked for three years of prison, later reducing his demand to 9 months, for the accusation of pressure on other personnel during a picket during the general strike of 29th March 2012.

The status of the recourse presented to the European Tribunals after the condemnation of UGT unionists at Asturias and the continuation of the judicial battle concerning several proceedings relating to the mobilisation of miners were also explained at the meeting.

We also spoke of the situation of other workers prosecuted and condemned for having participated in mobilisations in defence of workers, accused in the name of the gag law or for other crimes habitually associated with all these cases in which the prosecutors action take precedent and, above all, the agents of order benefit from the presumption of veracity in the realisation of complaints against workers or unionists during the mobilisations.

In particular, the AndrĂ©s BĂłdalo affair was addressed. This SAT (Andalusian Workers Trade Union) unionist and municipal councillor for the city of JaĂ©n, condemned to 3.5 years of prison and already imprisoned 7 months, is accused of an aggression that he didnâ€™t commit, as would have been shown by video recordings realised by the forces of order themselves which the judge, however, found inconvenient to take into account at the trial. We spoke of the possibility of helping him in his demand for a pardon. 4 November, BĂłdalo undertook a hunger strike to denounce his treatment in prison.

At the meeting, it was mentioned that the following day a meeting of the CCOO would take place in the Marcelino Camacho auditorium, in Madrid, where Georgina Cisquellaâ€™s documentary on the struggle of the Coca-Cola workers would be projected.

Also, information was shared on the elaboration of the documentary â€śNo solo ochoâ€ť (They arenâ€™t only 8), by Pablo RoldĂˇn, on the struggle of the Airbus 8, of which he will show the steadfastness and engagement, as well as their acquittal, in the combat for the repeal of 315.3 and the annulation of all the proceedings for going on strike in Spain. In the meeting, it was decided to contribute to making known the campaign of support and crowdfunding to finance the work of the editing of the film â€śNo solo ochoâ€ť.

At the end of the month of November, the commission will meet again in Madrid.