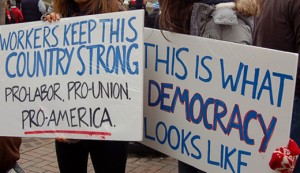 Sent in by Adrian Weir

LOS ANGELES – “Our nation’s basic labor law, theĀ National Labor Relations Act, no longer fulfills its promise to U.S. workers,” the AFL-CIO said in a bold resolution passed during the federation’s convention here this week. The federation says the U.S. no longer obeys its own law encouraging workers to collectively bargain, self-organize, and exercise their other freedoms, and therefore it must be reformed.

Though the rights granted by the NLRA in 1935 enabled workers to establish the American labor movement, “as the economy evolved and employer opposition became more virulent and sophisticated while the law stood still, that progress stalled and then reversed,” theĀ resolutionĀ declared.

The labor movement has had a solution in mind for the past 10 years: the Employee Free Choice Act, which would allow workers to form a union as soon as the majority at a workplace sign cards indicating that this was their desire. When a majority signed the cards, the union would automatically be in place at the workplace; there would be no need for a union election, which allows employers to fire pro-union workers after their pre-election activity thrust them into the spotlight.

From the beginning, the EFCA has beenĀ blocked, filibustered and opposedĀ by Republicans and even conservative Democrats.

“Today,” the resolution elaborated, “federal labor law no longer fits the economy, the employment relationship, or the workplace, and after almost 80 years of practice, employers, aided byĀ the Taft-Hartley amendments of 1947Ā and a multibillion-dollar industry of ‘union-avoidance’ consultants, have nearly perfected the subtle and sometimes not-so-subtle exercise of the very economic power the act was designed to counterbalance.”

It said, “Labor law reform should remedy employers’ increasinglyĀ sophisticated and well-funded evasion of the intent of the original actĀ to redress ‘inequality of bargaining power’ and also the growing misfit between the NLRA and the modern economy and employment relationship.”

AFL-CIO President Richard Trumka drove the point home during his rousingĀ keynote addressĀ at the convention, remarking, “Here’s the truth we live every day: We work harder, we work longer hours, we create more – more goods, more services, more of everything – and yet, most of us earn less. Less than we earned five years ago. Less than we earned 15 years ago. Barely more than we earned 35 years ago. Our biggest employers – Walmart, McDonald’s – their whole business model is about keeping the people who work for them poor. And Wall Street cheers them on.

“Drawing lessons from the EFCA battle, and the emerging new struggles and forms of organizing, the labor movement has concluded that instead of a single-issue labor law struggle, a comprehensive fight for broad-based labor law reform can draw wider allies into a winning movement. The convention’s decision toĀ unite with workers and organizations outside of unionsĀ is widely seen here as key in this struggle.Following this train of thought, the resolution stated, “The AFL-CIO and affiliated unions, together with a broad coalition of progressive allies, must embark on a multi-year political and legislative campaign to obtain fundamental changes in our nation’s labor laws.

“This campaign should be “founded on the principle that vibrant organizations of working people and electoral and governance reforms are both critical components of economic prosperity and a democratic revival in the United States.” the federation said. “The former cannot be realized without the latter.”The resolution “urges the introduction of a labor law reform bill in Congress as soon as possible to address the failures of the current law.

The reforms should speak to the critical place of labor organization and collective bargaining in redressing growing income inequality and the resulting imbalance in our political system.””The reforms should ensure that all workers have the right to organize and engage in collective bargaining,” it said. “The protections of labor law should extend to:

* workers who have been classified as independent contractors, but who have no real economic independence from the employers they serve;

* all government workers; and all agricultural workers.

“Responding to the attacks on public worker rights in Wisconsin, Michigan and other states, and the exclusion of agricultural workers from labor law protection, the resolution said overhauled labor law must ensure that, “Public safety personnel and others who serve the public and those who labor in the fields” are no longer “treated as second-class citizens when it comes to their workplace rights.”

Reform at the federal level should be coupled with reform at state and local levels to ensure this comprehensive coverage, the resolution said.

“The reforms should not simply reaffirm a right to representation and to work under a collectively bargained agreement that is never realized by the vast majority of U.S. workers,” the AFL-CIO declared.

Instead, it should “expressly encourage the exercise of that right and include sufficiently strong substantive changes to make the right meaningful and real for all workers.”