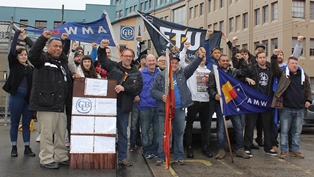 Carlton United Breweries, who manufacture most of Australia’s most popular beers, has sacked 54 union machine maintenance workers at its Melbourne brewery ahead of the impending merger between Carlton United’s parent company SABMiller and AB InBev.

The workers, members the Australian Manufacturing Workers Union (AMWU) and the Electrical Trade Union (ETU), were told their jobs would be contracted out but they could return to work as employees of the subcontractor – with a 65% pay cut!

The unions are contesting the dismissals and demanding reinstatement and respect for existing agreements, with the support of the production workers at the plant represented by the United Voice union.

AMWU Assistant State Secretary Craig Kelly denounced the dismissals as ‚Äòcalculated union-busting‚Äô, planned in advance as the company stockpiled supplies to pubs and big retailers. Prior to the dismissals, the company was working the maintenance crews over 60 hours per week but refused to hire new workers.

3G built a Brazilian brewery company into a global giant through continuous cost-cutting and aggressive acquisitions.

Click here to show your support for Aussie brewery workers.