USA: How The ‘Right To Work’ Movement Fell Flat On Its Face In 2013 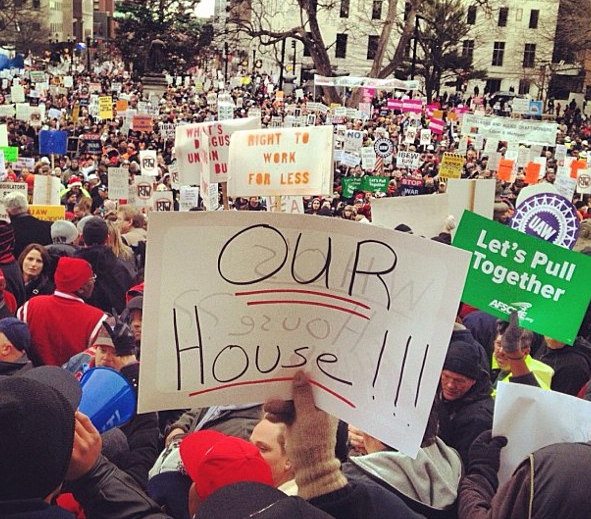 A year ago, in one of the most shocking reversals in the state’s history,┬ĀMichigan Gov. Rick Snyder┬Āsigned a “right to work” bill into law behind closed doors as more than 12,000 protesters raged outside.

Right wing groups crowed, saying union restrictions in the home of the auto industry meant the labor movement was on its last legs.┬ĀThey talked about which states would go next.

And then, nothing.┬ĀWell, not nothing. But what anti-worker pundits said would be a domino effect was more like a cricket effect. In 2013, no state passed a “right to work” law.

Incorrectly-named “right to work” laws┬Āput restrictions on contracts union workers can make with employers. They ban fair share clauses which require that workers pay dues to have the protection of the union. Unions are left in the position of providing services without being able to fund those services, and they starve.

“Right to work” laws have┬Ānothing to do with freedom. They are simply a tactic to defund unions and weaken the ability of workers to advocate for themselves. And it shows:┬Āstates with “right to work” laws┬Āhave lower wages, higher poverty rates, and more workplace injuries and fatalities than free bargaining states.

In Missouri,┬Āwhere Republicans controlled supermajorities in both the state House and Senate, some legislators pursued a┬Ā“paycheck deception”┬Ābill, which restricts unions’ ability to make political contributions.┬ĀMissouri House Speaker Tim Jones (R-Eureka)┬Ācalled it a step toward a “right to work law.” Based heavily on an ALEC model bill, paycheck deception moved swiftly through Republican-lead committees.

But workers, union and non-union (including hundreds of Working America members), made their voices heard. Emails, letters, and phone calls flooded legislative offices in Jefferson City. The bill passed the Senate after an┬Ā8-hour Democratic filibuster,┬Ābut House legislators were getting skittish. Bill proponents were having a hard time answering simple questions about why additional restrictions on union dues were needed. Support for the bill dwindled with each test vote.

“Paycheck deception” passed the House by a narrower than expected margin, and Speaker Jones prepared to move on to “right to work.” But Gov. Jay Nixon vetoed paycheck deception, calling it unnecessary. By the September veto session, too many moderate Republicans had abandoned the effort, and the bill died outright.

Did Republicans get the message? Absolutely not. In December special session centered around┬Ātax incentives for Boeing,┬Āa small group tried and failed to insert “right to work” language. ALEC member┬ĀRep. Eric Burlison (R-Springfield)called it “a good opportunity to begin that fight” ahead of 2014.

In Ohio,┬Āthe anti-union effort has centered around gathering petitions to get “right to work” on the 2014 ballot. As we know, you need to get a certain number of signatures to get an issue on the ballot. For Ohio, that number is 385,000, and you always want extra signatures in case some are validated.

The Tea Party group┬ĀOhioans for Workplace Freedom┬Āstarted circulating petitions in February 2012. After 20 months, they announced they have collected 100,000 signatures.

At this rate, as┬ĀOhio bloggers at Plunderbund┬Ānoted, the anti-union group would need 40 m0re months to put “right to work” on the ballot. And since they’ve already burned through┬Ā$118,000 in paid petition gatherers,┬Āchances are they’d run out of money first.

Let’s compare that with 2011,┬Āwhen Gov. John Kasich and Republicans in the legislative rammed through the union-busting Senate Bill 5. The bill passed on March 30. On June 29, after only 3 months, We Are Ohio delivered 1.3 million signatures to the Secretary of State to get a repeal of SB 5 on the ballot. In November,┬ĀSB 5 was repealed┬Āby 60 percent of voters.

What’s going on here? What the Tea Party and the anti-union forces in Ohio don’t get is that once you get past a small group of billionaires and right-wing ideologues, there is no desire to restrict collective bargaining in Ohio. None. People are looking for good jobs, affordable health care, and decent schools to send their kids.

Meanwhile, the 2011 battle over Senate Bill 5, largely ignored by the national media, still reverberates throughout the Buckeye State.┬ĀTreasurer Josh Mandel,┬Āa Republican supporter of SB 5, lost a Senate bid despite more than $19 million in outside aide.┬ĀMitt Romneyhaplessly flip-flopped on SB 5 and consistently delivered an anti-union message, lost in Ohio in part because of union members of all political stripes voting for his opponent. And in 2013, SB 5 supporter Toledo┬ĀMayor Mike Bell┬Āwas ousted, while a┬ĀTea Party-backed pension-cutting amendment┬Āwas rejected in Cincinnati by a 57-point margin.

In Oregon,┬Āthe story is even shorter. ┬ĀAn Portland attorney named Jill Gibson Odell┬Āis sponsoring a “right to work” initiative in her state. Odell is excited about the “national money to be had” to assist her campaign, so she’s not even pretending “right to work” is something Oregonians themselves want. In 2013, little to no progress was made on getting the issue on the ballot, and popular┬ĀGov. John Kitzhaber┬Āsaid he will publicly oppose it. Meanwhile,workers in Portland got paid sick days,┬Āand a statewide sick leave ordinance is expected to pass in 2014.

What to expect in 2014?┬ĀWell, as the AP reports, the main targets for “right to work” proponents are┬ĀMissouri, Ohio, and Oregon,┬Āshowing that these folks have learned nothing from the past year. While their efforts stall, Americans of all political persuasions are starting to support minimum wage increases, sick leave, wage theft protections, and progressive tax codes in increasing numbers.

Working America will be vigilant to mobilize against any “right to work” measure, wherever it crops up. But make no mistake: Michigan wasn’t the start of a domino effect. It was a wake up call. And outside the right-wing think tank bubble, American workers are fully awake.

Join Working America today to get involved with the fight for working families in your state.