The US needs to improve workers‚Äô rights 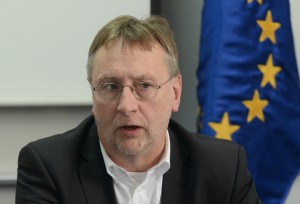 Labour rights in the US must be improved before any potential TTIP deal is signed according to the chairman of the European Parliament‚Äôs Committee on International Trade, Bernd Lange.

Bernd Lange MEP (S&D group) is a German politician with the Social Democratic Party and is the chairman of the European Parliament‚Äôs Committee on International Trade.

The latest round of TTIP negotiations has seen the new EU-proposals for investor protection discussed for the first time. The Commission‚Äôs reforms have already been¬Ýcriticised by the Association of Judges¬Ýfor a perceived lack of independence. How do things currently stand and what is your take on the situation?

First of all, I would mention that the 12th round of negotiations has not yet finished and the fact it has been extended is a positive sign. Up to now the USA has hardly shifted from its position, but now it seems they are ready to move.

Investor protection has been discussed, but has not yet been put up for negotiation as the USA still has reservations about the EU‚Äôs proposal. In my opinion, the Commission‚Äôs proposed solution is the minimum that is required of modern investment law. This includes appointing independent judges to rule on disputes. A sound review procedure, in line with normal legal practices, is also necessary. We also have to maintain the capacity to amend our laws, without fear of subsequent legal action, which has been the case previously. I believe that this is the minimum for a modern agreement of this nature.

‚ÄúHigh standards will not be lowered,‚Äù assured US trade representative Michael Froman. However, TTIP wants to reduce ‚Äúnon-tariff barriers‚Äù and its critics have pointed out that even minimum standards of workers‚Äô rights are at stake. How do we keep social dumping out of TTIP?

Social legislation and fundamental workers‚Äô rights should not be up for grabs. The deal with Vietnam is a good example of this. We can‚Äôt put ourselves in the situation where dumping is allowed on one side of the agreement, but labour laws are respected on the other. To be blunt, workers‚Äô rights have to be improved in some US states.

The EU‚Äôs chief negotiator, Ignacio Garcia Bercero, said on Friday (26 February) that the deal would be concluded this year ‚Äúprovided that the substance is right‚Äù. Is that realistic?

If you had asked me at the beginning of last week, my answer would have been no. But now I am more confident and we will have to see how things progress up until July. The USA will have to clear up some issues which are currently proving to be controversial. The most sensitive subjects include public procurement, the provision of services, geographical protection and designation, as well as data flows.

The USA‚Äôs progress has been, of course, accompanied by many political problems. The Trans-Pacific Partnership (TTP) currently lacks in majority in Congress and it will have a bearing on the TTIP negotiations. If further concessions are negotiated in TTIP, it is probably going to be more difficult for TTP to be adopted. In addition, a number of presidential candidates, including Donald Trump, have said that they do not want a free trade agreement.

The EU‚Äôs pursuit of bilateral trade agreements is not completely in line with the WTO‚Äôs idea of a global trading system. At the moment, it is not feasible, given Brazil‚Äôs, China‚Äôs and India‚Äôs objections. Do you think Europe will make any progress at the next Doha Round?

Bilateral agreements are just a plan B. But, when the chance to sign an agreement that includes good standards and regulations on workers‚Äô rights presents itself, it can be a positive due to the effect it has on other agreements. The WTO remains a priority, but it incorporates 164 countries, all of which have to come to a unanimous decision. Some countries are aggressively pursuing their own interests. However, at the last conference in Nairobi in November, we managed to adopt a few points, including special protection measures for less developed countries.

In Brussels, thousands of European steelworkers recently demonstrated against cheap competition from China, and the proposal to grant China market economy status, which would facilitate imports into Europe. How do you evaluate the project?

We could discuss market economy status and China until the cows come home, but the important point to remember is that the protocol that regulates China‚Äôs accession to the WTO expires on 11 December this year. So it is imperative that we build trade defence instruments that will protect us from measures such as dumping. Without them, our industries will be at risk.