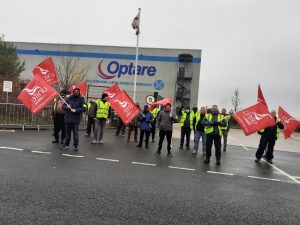 The government has been forced to confirm that workers taking lawful industrial action have a right to picket their workplace during the Covid-19 lockdown.

In doing so they have vetoed the actions of North Yorkshire police who last week told Unite workers taking lawful industrial action to desist from picketing on the morning after new coronavirus regulations were introduced.

A judicial review was due to be heard at the high court today (Friday 13 November) against the chief constable of North Yorkshire and the secretary of state for ¬Ýhealth and social care, but at the last minute the government conceded that the right to picket should be upheld.

The case emerged as a result of Unite members who were on strike at Optare bus factory in Sherburn in Elmet last Friday (6 November) and who were undertaking socially distanced picketing, being moved on by the police and warned that if they returned they would be issued with penalty notices for breaking lockdown rules.

Unite‚Äôs legal case was based on the right to picket being a fundamental right protected by the Human Rights Act.

The government finally accepted this argument and has issued guidance to all police forces which makes it clear that workers can undertake socially distanced picketing, as it is covered by the exception on the right to go to work during the lockdown.

Unite is now awaiting the court formally confirming the right to picket by way of a court order.

‚ÄúUnite‚Äôs members at Optare were holding a legal picket and abiding by strict social distancing rules. They had been told their workplace was safe for them to continue working, yet the police claimed that a picket outside the workplace contravened the lockdown rules. The decision by the police to break up that picket was wrong and the government has now conceded it was wrong.

‚ÄúWe have seen opportunistic employers take advantage of this crisis with ‚Äòfire and rehire‚Äô, seeking to have workers pay for this crisis with their terms and conditions. For however long this crisis lasts this victory on picketing means that we retain the ability to hold bad bosses to account‚Äù