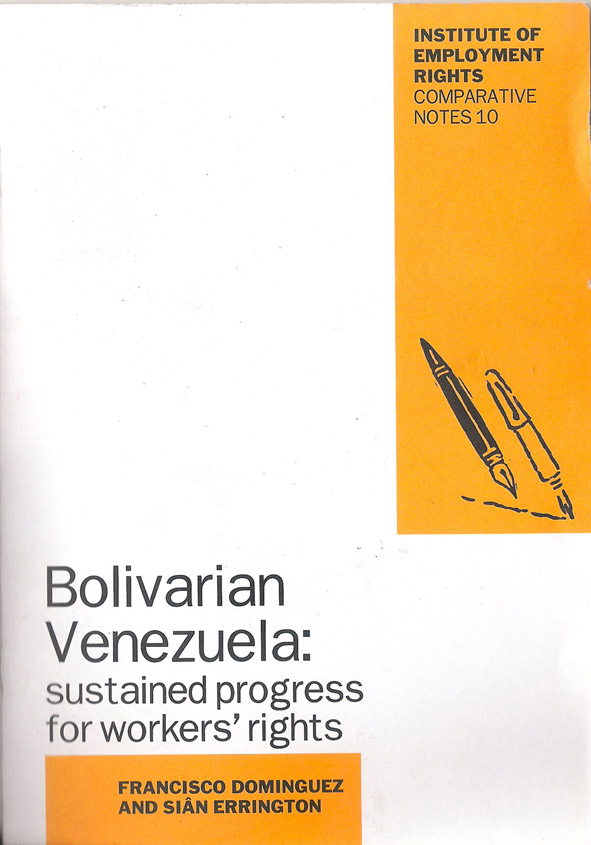 With the forces of counter-revolution apparently rampant in Caracas (although importantly not supported in barrios) and drooled over by the western press â€“ led by neo-liberal free sheet (who would pay for it) City AM â€“ the Institute of Employment Rights has recently published the tenth booklet in its series of Comparative Notes, examining the system of labour and employment rights in countries around the world, this time in Bolivarian Venezuela.

Reading the booklet simultaneously with Figueroa Clarkâ€™s biography of Salvador AIlende I was struck by the similarities between the Popular Unity in Chile of the early 1970s and todayâ€™s Venezuela. With regard to the right wing gangs now on the streets in Caracas, Figueroa Clark notes thatÂ â€śCastro privately encouraged the Popular Unity to take steps to prepare for the violence that the reactionary elite and its allies in the United States were clearly preparing.â€ť

In the comparative context, Figueroa Clark describes the industrial relations philosophy of Popular Unity: â€śParticipation was to be demanded at every level. Workers were to participate in management of enterprises, and trade unions and other social organisations were to be incorporated into administering enterprises, and in the planning process.â€ťSimilarly, in this booklet on Venezuela, the authors make the point:Â â€śRunning through the [new labour] law, as in much of Venezuelan political life is the nurturing of a participative democracy â€¦ ordinary people are not expected to be passive but politically active and the engine of transformation in the country.â€ť

The passing into law of the new labour code in Venezuela was one of the last acts of late President Hugo ChĂˇvez. But this was no top down drafting â€“ the labour code process was aÂ â€śproduct of more than 19,000 proposals resulting from over 1,800 popular assemblies of working people held around the country in liaison with trade unions.â€ť

TheÂ LOTT, as itâ€™s known by its Spanish acronym, deals with most aspects of working life and more:

Â That such an all-embracing statute could be passed into law with the support of the unions is all the more remarkable given the unions have been in a state of flux since the advent of ChĂˇvismo. The old unions, organised in theÂ CTVÂ confederation, supported the coup against ChĂˇvez in 2002.

TheÂ CTVÂ has now shrunk to a rump although union density has grown under ChĂˇvez, not least because more and more workers have been brought in from the informal labour market.As they enter the formal sector workers now join the new unions organised in theÂ CBSTconfederation.

It wasÂ CBSTÂ General Secretary, Carlos LĂłpez, who participated in the special commission convened to synthesise the workersâ€™ proposals into the new legislation.It remains a shame that theÂ CTVÂ is still able to claim some official recognition within the international labour movement.This booklet is extremely timely. Given the western press support for the counter revolutionary elements itâ€™s very refreshing to be able to read about just one aspect of the positive advances of working people in the ChĂˇvez era.

Donâ€™t just read it yourself,Â buy it and pass it on!