Resisting attacks on workers‚Äô rights across the EU 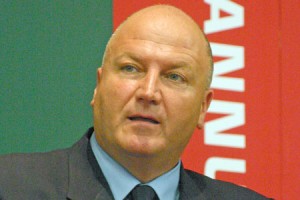 Bob Crow, President of the Campaign For Trade Union Fredom

Across Europe workers‚Äô rights are under attack.

Not just in Britain, under this vehemently anti-union Government, but in every corner of the continent austerity, and the demands of the EU and the banks, are being used as an excuse to hammer down the working class at every opportunity.

Under the guise of ‚Äúderegulation‚Äù, code for giving the bosses carte blanche, the EU Commission recently produced a communique ‚ÄúRefit ‚Äì fit for growth‚Äù, a manifesto for hacking back on consultation, information and health and safety.

It is these kind of far-reaching proposals, smuggled out with little fanfare, that are mapping out the future framework for a resurgent, neo-liberal Europe where even the pretence of protecting jobs and working conditions is stripped away and the true nature of the beast is allowed to run free.

As the myth of ‚Äúsocial Europe‚Äù disappears down the corridors of the Brussels bureaucracy groups of workers are fighting back. In Portugal, in Greece, in Spain and in a barrage of other disputes that a pro-business media would rather we didn‚Äôt know about, resistance is building and brave groups of men and women are fighting back.

Here in Britain we know exactly what the deal is with this Government.

The ‚ÄúTax On Justice‚Äù from the levying of punitive of fees on workers seeking fairness in the Employment Tribunals is probably the most overt and cynical of the recent attacks.

This move, supported by the Liberals and not opposed by Labour, has one objective and that is pricing working class people out of the justice system.

Repeatedly we here talk from business and the Tory right about a new raft of anti-union laws to impose an artificial system of bent and distorted democracy on our class that no money grubbing politician would be prepared to subject themselves to.

The heirs of Thatcherism consider their anti-union agenda to be unfinished business.

So, through the CTUF, we have to mobilise our forces to fight off every new attack on workers‚Äô rights and freedoms that comes our way. Our campaign is the focal point for every one of those battles both now and in the future.

But, importantly, we have to maintain the momentum behind the continuing campaign to sweep away every last shred of the anti-union laws imposed by the last Tory Government, laws attacking ordinary working men and women that Labour, after thirteen years in power, did nothing to repeal.

Tough times call for strong organisation and a militant response. They also call for the maximum unity and solidarity on an international basis.

The CTUF is the unifying vehicle for delivering just that.