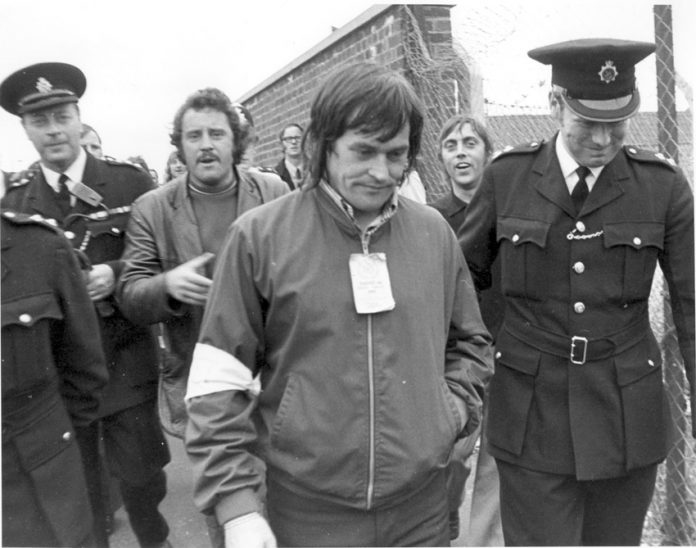 Tony Merrick lead away by the police at Midland Cold Storage in 1972.

Tony Merrick, who passed away last week, was a giant of the British trade union movement who stood up to the state’s attacks on workers and was jailed with the Pentonville Five for defending his class.

Reflecting on the life of Tony Merrick and his pivotal role as one of the Pentonville Five from my home in south east London, I was reminded of another famous strike connected with the Thames riverside ŌĆō that of the Bermondsey women workers in 1911. Like the Five, those women and girls, working mainly in jam and biscuit factories, inspired a generation of workers to fight back against injustice, their strikes quickly spreading to other groups, including those in the nearby Surrey docks.

And so it was when Tony, along with Vic Turner, Bernie Steer, Con Clancy and Derek Watkins, was imprisoned in 1972 for picketing Midland Cold Storage (MCS) ŌĆō now the site of the Olympic Park in Stratford, East London. Anyone who has been in my office at UniteŌĆÖs headquarters will have seen the framed poster on my wall signed by the Five which acts as a proud and constant reminder to me not only of their struggle, but of those of construction and postal workers, miners and transport workers at the time, the ongoing fight for justice for the Shrewsbury 24, and later disputes such as those led by the women workers at Grunwick, Sky Chefs and Gate Gourmet.

This wave of action also saw the Official Solicitor emerge to eventually ŌĆśFree the FiveŌĆÖ following national solidarity strikes, the national shutdown of the docks and much of our press, public transport and even the threat of a TUC-supported general strike.┬ĀTwo years later, we saw the defeat of Ted HeathŌĆÖs government and a Labour victory in the general election of 1974. This, ultimately, led to the repeal of the Act.

The lessons we learn from this period are important ones for our struggles today. The Pentonville Five exposed the true role of the state and its agents in the police, private investigators and the secret services. Their attempts to crush dissent by infiltrating, undermining and sabotaging the activities of trade unionists demonstrated their contempt for anyone seeking to defend jobs, pay and wider working-class interests.

Phone taps, mail intercepts and undercover ŌĆśplantsŌĆÖ inside our movement were all utilised in the attack on our unions and class. This included the ŌĆśrecruitmentŌĆÖ of the soon-to-be chair of the executive council of the Transport and General WorkersŌĆÖ Union itself. Brian Nicholson, a docker, was subsequently ŌĆśexposedŌĆÖ as an agent of the state (MI5) working at the heart of the TGWU, the dockersŌĆÖ own union. IŌĆÖve got no doubt that todayŌĆÖs Brians are being groomed for office by those same organisations ŌĆō who never changed their view that our unions represented an ŌĆśenemy within.ŌĆÖ

The 1972 actions and the picket that led to the arrest of Tony and his comrades were essentially about jobs, pay and union organisation in the face of the introduction of new technology, in this case, containerisation. The Five and their union werenŌĆÖt opposed containerisation itself but were campaigning to create a ŌĆśbuffer zoneŌĆÖ around ports where only registered dockworkers could load, unload and handle container cargo.

Midland Cold Storage was inside one of these buffer zones, less than two miles from the London docks, and the dispute was essentially to assert the dockersŌĆÖ right to control what was dock work. This was a crucial and legitimate demand when you consider that newly-emerging container traffic required a tenth of the existing workforce to handle.

As with HeatonŌĆÖs in Merseyside, MCS attempted to ban the picket, seeking an injunction from the NIRC. The imprisonment of the Five for contempt of court, having refused to appear before and accept the ruling of the NIRC, led to an immediate national stoppage in the docks, with tens of thousands of printers, transport workers, miners and others walking out over the following days.

Thousands joined daily demonstrations at the gates of Pentonville prison and by the time the Five were released five days later, hundreds of thousands had walked out and the TUC had supported the call for a general strike. Their release resulted in defeat ŌĆō albeit temporary, as we now know ŌĆō of the casualisation and deregulation plans involved in the National Dock Labour Scheme. These reforms were finally implemented some 17 years later by the Thatcher government.

Tony Merrick, alongside all those involved in those disputes, inspired a generation of trade unionists and shop stewards. But the battles for control of our unions by elected workplace shop stewards, and the instilling of lay member democracy in our rulebooks, continue.┬ĀOur unions have seen numerous attempts, some successful, by officers and a growing bureaucracy to control the actions of rank and file members.

Unite follows its predecessor, the TGWU, and the proud shop stewards of our legacy engineering unions in being led by our members. But this had to be won and we have to fight constantly to retain our values and politics.┬ĀWe have never repudiated industrial action and today we have a ┬Ż36 million strike fund.┬ĀWe try to inspire confidence in our shop stewards and class at every opportunity to encourage them to fight back, winning not only at work for our members but in society and politically for our class.

And as we face todayŌĆÖs challenges, including automation, artificial intelligence and the digitalisation of work, recovering and rebuilding post-Covid, Brexit and the climate emergency, there are opportunities for us to win. Our agenda must be bold: a million green jobs, diversification and a transition to a greener, cleaner economy, a shorter working week, early retirement and the fair distribution of our common wealth across our nations.

ThatŌĆÖs what Tony and his generation of fighting trade unionists have taught us, and the challenge they leave us. We have to inspire and nurture the will to fight, have confidence in our ideas and in the need to break bad laws when necessary. We must recognise the need for class solidarity and unity of purpose.

We know, of course, that this will only be achieved by a confident, united and powerful trade union movement, rooted in our workplaces and communities; one that can win the battle of ideas and convince workers of the need to fight for that better, fairer and greener world.

ItŌĆÖs a challenge that will define our leadership in the coming years. I look forward to that fight with the same enthusiasm that Tony did forty-eight years ago. Rest in peace, comrade.

Steve Turner is the assistant general secretary of Unite the Union, responsible for manufacturing. ┬ĀHe is also national chair of the People’s Assembly Against Austerity.

This article first appeared on the Tribune website August 4th, 2020