No Turning Back On Labour Rights 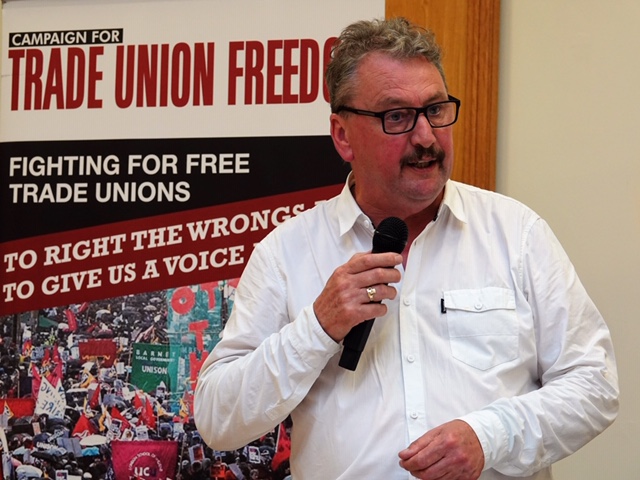 This blog was first posted on Labour Outlook¬ÝSeptember¬Ý12th¬Ý

To nobody‚Äôs great surprise the coronavirus crisis has exposed the dreadful weaknesses in labour law in our country and clearly shown the need for a new framework of labour rights in Britain.

We need radical reform in health and safety rights, individual rights at work and of course rights for trade unions at least compliant with International Labour Organisation (ILO) Conventions 87 and 98, (signed by Britain)¬Ý guaranteeing ¬Ýa right to join a union, a right to organise, a right to collective bargaining and by implication a right to strike.

Of course we have had 40 years of Tory and New Labour governments breaching international labour law in specific and not very limited ways!

Back to the pandemic. When the Government first started to relax the lock down and suggest workers, particularly teachers, should return to their workplaces there was much discussion about safe places of work and the use of Employment Rights Act 1996 s44 that gives workers the qualified right not to work if they feel that the working environment is unsafe to do so.

The problem here is obvious, the onus is on the individual worker or groups of workers. I can find no examples where, particularly in non-union workplaces, this right was ever exercised. Although there are meant to be protections afforded to workers who exercise their rights it‚Äôs not difficult to imagine that the power imbalance between workers and employers would in most cases inhibit any use of s44.

Although in the current climate they may find it more difficult to limit rights to a safe place of work, let‚Äôs not forget that the Conservatives with their deregulatory zeal have made a point of targeting workplace health and safety. Among the first moves of the Tory led Coalition when elected in 2010 was to appoint Prof Ragnar L√∂fstedt to conduct a review of health and safety legislation.

His report, with the Orwellian title of Reclaiming Health and Safety for All, marked the start of the shift away from the precautionary approach to workplace health and safety to something more like the American system; softening us up for the ill-fated TTIP treaty and currently what promises to be a truly dreadful post Brexit US-UK trade deal.

There can be no doubt that during the height of the pandemic those who earn the least in our society were those who made the biggest contribution. Care workers and NHS staff, workers in wholesale and retail distribution and workers in bus and rail transport particularly stand out.

What has been their reward? Care workers and shop workers who are most likely to be on the National Minimum Wage (NMW) have been told that the Chancellor is to apply an ‚Äúemergency brake‚Äù on increases in the NMW due next April. Currently set at ¬£8.72/hour for ‚Äòadult‚Äô workers it was set to rise to ¬£9.21/hour but no more it seems.

In response Paddy Lillis, General Secretary of shop workers‚Äô union USDAW, said: ‚ÄúThe Coronavirus pandemic has clearly demonstrated how reliant the country is on millions of low-paid key workers, providing essential services to help ensure the country is fed, healthy and safe. While they appreciated the Thursday clapping, that does not put food on the table. The recognition they need and deserve is a wage they can live on.‚Äù

This arbitrary action taken by the Chancellor must clearly show how necessary was and is the measures set out in Labour‚Äôs recent manifesto committing to the introduction of sectoral collective bargaining. The proposed Ministry of Labour (under whatever name was adopted) would have been charged with ¬Ýestablishing a forum bringing together employers‚Äô federations and unions organising in the sector, in this case USDAW and Unite, to bargain over terms and conditions.

All the evidence shows that union negotiated agreements will have superior terms and conditions than wages arrived at by others means. More importantly, it introduces a strong element of workplace democracy into wage determination; collective bargaining led by the unions gives their members a voice which no other body, including the Low Pay Commission, can match.

At present, Labour remains committed to restoring unions to a central role in industrial relations and worker representation, there has been no repudiation of its labour rights offer:

This includes a wider new framework of trade union law:

With no Labour Conference this year the Labour Connected event will provide a forum for policy discussions but no decisions will be taken. The reports of the current round of National Policy Forum consultations will apparently be published after Labour Connected.Nonetheless the submission made by Prof Keith Ewing and John Hendy QC on behalf of the Institute of Employment Rights to the NPF Economy, Business & Trade Policy Commission provides a good signpost for current and future work.

The public are more and more disenchanted with the incompetence of the Government failing to deal with the Covid-19 crisis; can and will this disenchantment be turned into something more profound? Time will tell. But what is certain is that now is not the time, as far as trade union and labour rights are concerned, to be turning back or moving to the centre.

Adrian Weir is Asst Secretary of the Campaign for Trade Union Freedom. CTUF and the Institute of Employment Rights are holding e-fringes during the virtual TUC Congress and Labour Connected, details and registration via https://www.ier.org.uk/institute-events/