No Safety Without The Unions 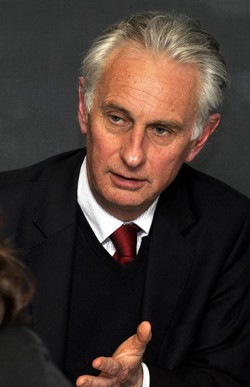 The government has now released its own ŌĆśguidancesŌĆÖ for a return to work by stealth ŌĆö cutting workersŌĆÖ representation out of the picture, writes Professor Keith Ewing, President of the Campaign For Trade Union Freedom

Last week the gloves came off. The pretence of government consultation of unions was dropped with the vicious attack on the teachers who decline to go back to work without the assurance that it is safe for their members, their membersŌĆÖ families, the pupils and their families.

Their view is shared by the Scottish, Welsh and Northern Irish governments and the BMA. It is also shared by the leaders of English local authorities. And more particularly, it is shared by most parents who donŌĆÖt want their kids to become carriers of the disease.

But the British government is desperate for teachers in England to get back to what it regards as their proper function: childminding ŌĆö so that business can get back to normal.

True, it was reported several weeks ago that the Department for Business, Energy and Industrial Strategy (BEIS) had consulted with unions about easing the lock-down, and facilitating a return to work. This, however, seems designed principally to help provide re-assurance and share the responsibility associated with the return to work in the knowledge that millions of people were fearful.

But there is no indication of any joint planning, negotiation or agreement with the trade unions about the pre-conditions of the return, or of the necessary infrastructure being settled before any return to work takes place.

On the contrary, it appears that the unions were given 12 hoursŌĆÖ notice of the advice the government intended to publish, their recommendations largely ignored in the eight heavily criticised guidance subsequently published on May 11.

Which brings us to the second point. This relates to the substance of the guidance, which states that:

ŌĆ£This guidance does not supersede any legal obligations relating to health and safety, employment or equalities and it is important that as a business or employer you continue to comply with your existing obligations ŌĆ”ŌĆØ

Yet each guide (there are eight) fails to set out what the existing obligations are ŌĆö and each fails to point out that it is not merely ŌĆ£importantŌĆØ to comply, but that it is a criminal offence not to.

In Britain there are 5,613,000 micro businesses (96 per cent of all businesses) that employ fewer than nine workers. They will not have health and safety officers and cannot be expected to know their statutory duties.

It would have been easy to set out (on a single page) the duty of every employer to provide PPE; keep the workplace and workstations safe; make a proper risk assessment; and not to penalise or dismiss a worker for refusing to work where he or she has a reasonable belief of imminent danger of infection.

That said, the guides set out sensible steps to minimise risk. The employer is advised to do its best to minimise the risk of infection. That is obviously sensible. The problem comes at the point where the employer considers it has done what is reasonable and that it would be too much trouble or expense to do more, even though risk remains. This is simply not good enough.

Employers need objective standards to determine whether they have sufficiently minimised risk. The words of the regulations, approved by Parliament, set out what is necessary to be done and these obligations should be stated in government guidance.

In the absence of a clear statement of the law workers face the cruel dilemma of either risking their (and their families) health or earning a living.

In relation to PPE the guides say: ŌĆ£Workplaces should not encourage the precautionary use of extra PPE to protect against Covid-19 outside clinical settings or when responding to a suspected or confirmed case of Covid-19.ŌĆØ

This canŌĆÖt be right. The Provision of Personal Protective Equipment Regulations 1992 says: ŌĆ£Every employer shall ensure that suitable personal protective equipment is provided to his employees who may be exposed to a risk to their health or safety while at work except where and to the extent that such risk has been adequately controlled by other means which are equally or more effective.ŌĆØ

So, if other steps are insufficient to eliminate the risk of infection, then PPE must be provided. What justification can there be for denying gloves to delivery drivers handling packages, or visors and face masks to those who have to work in confined spaces with other people (like shops, offices or schools), or have to mingle with other people (like ticket inspectors, such as the tragic case of Belly Mujinga)?

Far from their employers being advised not to provide PPE specifically against the risk to such workers, they should be advised that they are under a statutory duty to provide it. The point here is that our long established health and safety laws are being ignored.

Trade unions fought for statutory protection for at least 150 years. These laws are being trashed. So too are common-law obligations highlighted in legal advice to the NASUWT published last week.

Also last week, the HSE published its own guidance to a return to work. Although the HSE is an ŌĆ£armŌĆÖs lengthŌĆØ public body, its guidance on how to operate a ŌĆ£Covid-secureŌĆØ business would be risible were the matter not so grave.

The documents fail to mention any of the relevant regulations beyond advising employers to carry out a risk assessment. For the rest it merely advises that the employer ŌĆ£should think aboutŌĆØ various matters of safety.

As workers were being pressured back to work last week with inadequate guarantees about their safety, Brexit negotiations were breaking down because the government was not prepared to accept ŌĆ£a level playing fieldŌĆØ with the EU on environmental and labour rights.

The Covid-19 crisis is providing us with an alarming insight of the kind of employment protection we are likely to see if the post-Brexit structures are to be created by a Tory administration.