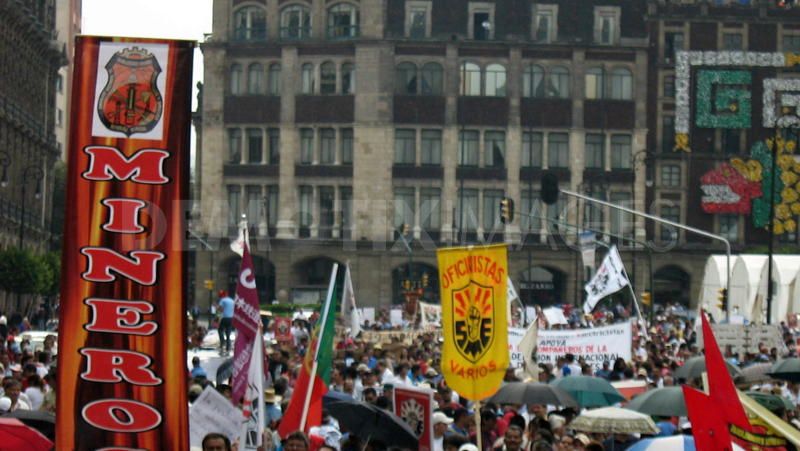 International and regional trade union groups have welcomed a commitment by Mexican Secretary for Labour and Social Welfare, Alfonso Navarrete Prida, to ratify ILO Convention 98 and promote genuine collective bargaining. This is a first step to end the use of ‚Äòprotection contracts‚Äô.

Naverette pledged to act after meetings with the ITUC, its Regional Organisation for the Americas TUCA, and IndustriALL Global Union whose sector is especially hard hit by the use of protection contracts that deny workers a say in their terms and conditions of work or their union.

Sharan Burrow, ITUC General Secretary, said ‚ÄúProtection contracts leave industrial relations wide open to corrupt practices, and represent a severe violation of freedom of association and the right to collective bargaining. Workers‚Äô rights to fully and democratically participate in setting wages and conditions of employment are fundamental, and the practice of corrupt protection contracts has been allowed to continue for far too long. We welcome the Minister‚Äôs commitment to look to discuss further legal reforms which we hope would put an end to this violation of workers‚Äô rights which affects large numbers of working people in Mexico‚Äù.

Fernando Lopes Assistant General Secretary of IndustriALL Global Union said, ‚ÄúDespite concrete steps being made at the meeting, there is still a long way to go before we can talk about positive changes. Our affiliates and other independent Mexican trade unions are constantly undermined in their daily work because of the unfair system of protection contracts. Ordinary workers and the Mexican economy are being held hostage to this rotten system which manipulates workers‚Äô rights and obstructs any progress in working and living conditions‚Äù.

The undertaking from the Mexican Minister follows a campaign by international and Mexican trade union bodies to outlaw protection contracts, culminating in a meeting in Mexico City last week where the unions set out their concerns in detail and called for the government to act.

Minister Navarette has also committed to look for timely resolution of a range of other issues raised by the unions.

To read the letter from Minister Naverette (in Spanish)