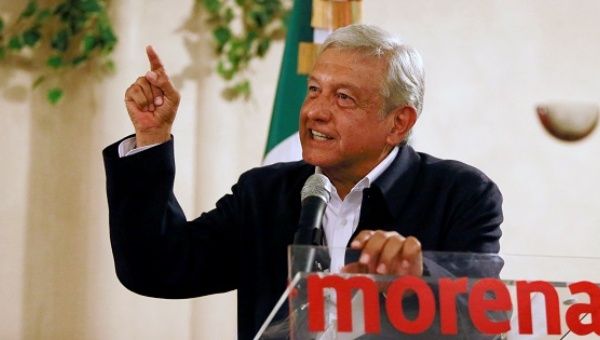 Below is a translation of an article from La Jornada Zacatecas (October 16th) reporting on a speech from Mexican presidential candidate AndrĂŠs Manuel LĂłpez Obrador in support of NapoleĂłn GĂłmez and Los Mineros.

LĂłpez Obrador visited Sombrerete, Miguel Auza and Rio Grande. Section 201 of Los Mineros in Sombrerete, where this speech was made, has been on strike against Grupo MĂŠxico for over ten years.

âEnding the persecution of union leaders, in the mining sector was one of the commitments made on October 14th by the national leader of the National Regeneration Movement (Morena), AndrĂŠs Manuel LĂłpez Obrador, during his meeting in Sombrerete..

Taking advantage of his presence in Sombrerete, a mining town, he said that not only is this change of attitude a commitment of those who fight for justice in Mexico, but he has received requests in this regard at the international level.

He recalled that during his visit to the United Kingdom at a meeting on September 6th addressed by General Secretary Len McCluskey and Assistant General Secretary Tony Burke of Unite which supports the “strongest party defending the workers” (the Labour Party) he said that: “I was asked by the leaders of the union not to abandon those who are being persecuted by this corrupt government of Enrique PeĂąa Nieto, as they were persecuted during the corrupt government of Felipe CalderĂłn.”

He made explicit reference to Los Mineros union leader NapoleĂłn GĂłmez Urrutia and said that: “He will be able to return to live in Mexico without any persecution, it is a commitment because he has been persecuted by the mafia in power.”

Also, on the trade union issue, he pointed out that Morena when in charge of the Federal Government would guarantee freedom and democracy within companies with the presence of unions so they do not have âyellow unionsâ but unions which defend the interests of workers.

“We will support all the leaders and in particular will guarantee freedom to the mining unions and that if the workers decide, there will always be elections so that the union leaders listen to the workers; so that they are not âcharroâ leaders who serve only the bosses; so that they really defend the workers and that there is trade union democracy,” he said.

As well as addressing the miners, he also mentioned the Zacatecan teachers, assuring them that with the triumph of Morena “the so-called âEducation Reformâ is going down the drain.â

Morena’s guarantee, he emphasized, is that “the government will not be in the hands of corrupt people; we are all going to assert honesty. Corruption will no longer be the example to follow, but honesty as a way of life and as a form of government. “

On another issue, AndrĂŠs Manuel LĂłpez Obrador spoke about the re-negotiations of the North American Free Trade Agreement (NAFTA), which are currently underway.

In this regard, he considered that it is “very risky” that Mexico has entered into these discussions on the trade agreement with the United States and Canada because President Enrique PeĂąa Nieto “is very weak and Donald Trump is acting arrogantly.”