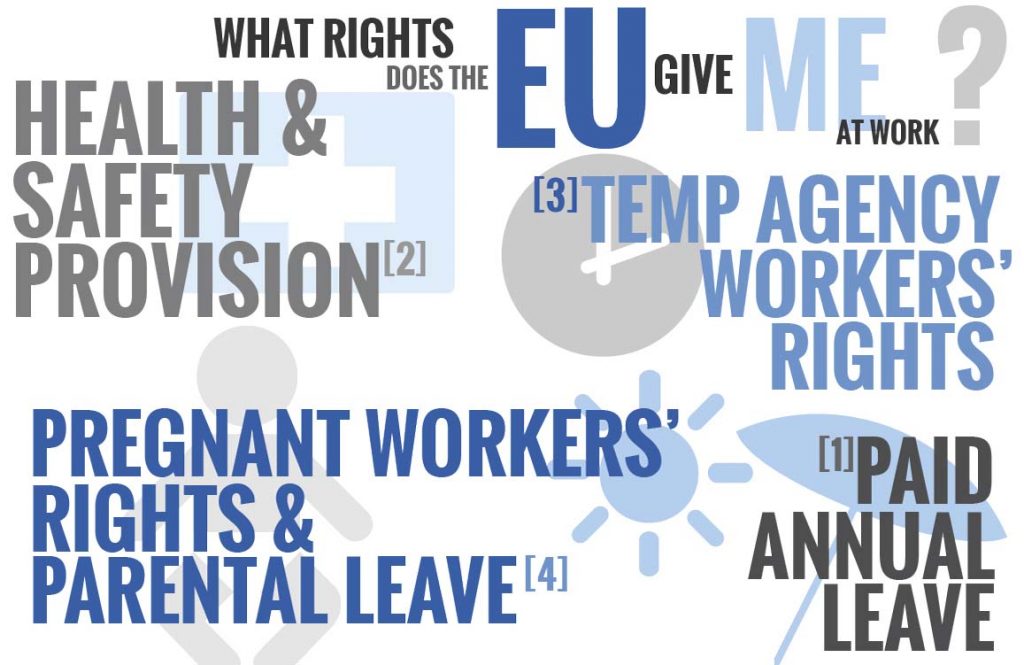 It came to light this week that Boris Johnson has instructed his ‘sherpa’ David Frost (a regular user of the Eurostar to¬†Brussels) ¬†to demand that any deal on withdrawal agreement from the EU unravels the ‘level playing field’ clauses agreed with the EU earlier this year including those on workers rights, environmental protection and consumer rights.

The LPF clauses (although in the Political declaration) are designed to stop the UK undermining EU rights and laws if and when the UK leaves the EU and providing continuing protection.

It has long been an ambition of the Tories and Brextremists to get rid of positive EU employment rights and turn the UK into an offshore, low wage, low skill economy with few employment protections – a sort of Singapore off the coast of Europe.

Below are just some of the key pieces of EU legislation, which have benefited working people here in the UK which the Javid and Johnson describe as Red Tape.

They may sound complex, but workers across the UK have received employment protection by them:

‚ÄĘ The part time workers framework agreement requires that part-time workers‚Äô employment conditions were not be less favourable than those of comparable full-time workers, with employers, required to take account of employees‚Äô preferences and their requests to transfer from full-time to part-time employment or vice versa. This legislation helped thousands of low paid women workers who worked in part time jobs.

‚ÄĘ And of course the temporary agency workers directive which guarantees a minimum level of effective protection to temporary and agency workers. The so-called Swedish Derogation that got around the WTR for agency workers will be scrapped after years of campaigning by unions.

‚ÄĘ This was coupled with the health & safety in fixed term and temporary employment ‚Äď an EU directive (91/383/EEC) which ensured that fixed-term and temporary agency workers, who are more exposed to the risk of accidents at work and occupational diseases than other workers, have the same level of safety and health protection at work as other employees.

‚ÄĘ Young people at work – an EU Directive which provided the protection of young people at work which insists that EU member states must prohibit the employment of children (i.e. those under the age of 15 or still in full-time compulsory education).

‚ÄĘ The working time directive, a piece of key health & safety legislation, watered down by the Tories with an ‚Äúopt-out‚ÄĚ for individuals. In the¬†EU each member state must ensure that every worker must not exceed working more than 48 hours on average, (over a 52 week period) as well as providing for minimum rest breaks during a shift, minimum weekly rest time and lest we forget ‚Äď guaranteed paid annual leave, of at least four weeks (28 days a year) ‚Äď excluding bank holidays.

‚ÄĘ The transfers of undertakings directive (TUPE) is one of the major protections for workers ‚Äď the EU Directive stopped the transfer of an undertaking (business) as constituting a valid grounds for dismissal. Rights and obligations under the employment contract pass from the previous employer to the new one although for economic, technical or organisational reasons can alter this.

At one time there companies did dismiss – and automatically sack – their entire workforces upon the transfer or sale of a business.

‚ÄĘ The information and consultation directive provides for a general framework for informing and consulting employees on major decisions being made by companies including the recent and probable development of the undertaking‚Äôs or the establishment‚Äôs activities and economic situation, the situation, structure and probable development of employment within the undertaking or establishment and any anticipatory measures envisaged.

It applies in particular where there is a threat to employment decisions likely to lead to substantial changes in work organisation or in contractual relations.

‚ÄĘ European works councils were set up under the initial EU directive (94/45/EC) in 1994. It was extended to the UK by another directive (97/74/EC) and adapted by a third directive (2006/109/EC) to the accession of Bulgaria and Romania.¬†Member States must provide for the right to establish European works councils in companies or groups of companies with at least a thousand employees in the EU. EWCs can be powerful bodies if used strategically by unions.

‚ÄĘ European company statute provides for a European company (SE) status, allowing companies incorporated in different member states to merge or form a holding company and providing for the involvement of employees in European companies. This is the subject of a special supplementary directive (2001/86/EC).

‚ÄĘ There is legislation that provides for transnational company agreement concluded by one or more representatives of a company or a group of companies and one or more workers‚Äô organisations (unions). They cover working and employment conditions and relations between employers and workers or their representatives.

‚ÄĘ On equality legislation, parental leave is part of a framework agreement for each parent. It applies to all workers and to all types of employment contract.

‚ÄĘ The EU directive on equal pay prohibited all discrimination on the grounds of sex in relation to pay and called upon the member states to eradicate any discrimination laid down in national laws, regulations or administrative provisions and to inform workers of measures taken in application of the directive.

‚ÄĘ The equal treatment in employment and occupation directive put in place a general framework to ensure equal treatment of individuals in the European Union, regardless of their religion or belief, disability, age or sexual orientation, as regards access to employment or occupation and membership of certain organisations.

This list is by no means exhaustive and no doubt there are many more examples.