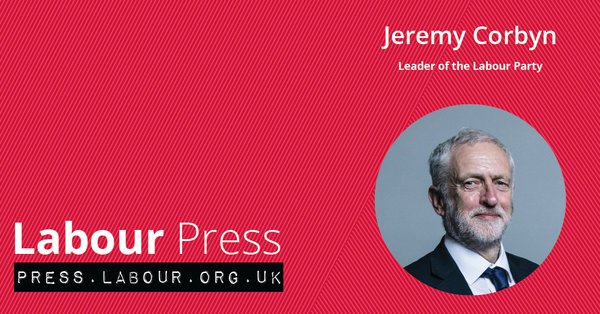 The Labour Party wants to secure stronger rights for UK workers and communities as we leave the EU, Jeremy Corbyn will tell UN chiefs in Geneva today.

Leader of the Labour Party, Jeremy Corbyn, is in Geneva to meet the Director-General of the International Labour Organisation, Guy Ryder, and UN High Commissioner for Human Rights, Michelle Bachelet.

Repeated attacks on rights at work and increased powers and privileges for corporations and employers have been at the heart of the failure of an economic system that needs urgent overhaul as we leave the EU.

While the Conservatives want to use Brexit as a race to the bottom in rights and standards, Labour is committed to strengthening rights and protections in the workplace.

‚ÄúBritain is leaving the EU, but we must and will work together with those in other countries to resist the pressure to undermine rights and protections at work.

‚ÄúTax dodging, speculation and unaccountable corporate power have created economic inequality on a vast scale and sucked wealth and jobs out of community after community.

‚ÄúAverage pay in Britain is now lower than a decade ago and workers have faced a concerted attack on their rights under this Tory Government.

‚ÄúWe are determined to secure stronger rights at work and fair rules for business as we leave the EU as part of a new economic settlement which delivers for the many, not the few.‚Äù